So Mojo was late for an appointment (not REALLY late, but Mojo Late, which means she might get there only TEN MINUTES EARLY instead of her usual fifteen or so) so she jumps in the car and heads down the mountain to civilization.

One of the many things about living far, far away from other people is, if you are late to go ANYWHERE, you have the added burden of an additional half hour tacked onto your time, which can work FOR or AGAINST you. If the roads are clear of other pesky drivers you can make up the odd five minutes or so by screeching around the mountain passes like Mario Andretti. But if you get behind a school bus or a turtle, it will easily add another fifteen or twenty minutes to your commute. There is NO PLACE TO PASS, even if the other driver is aware of you and trying to pull over to be nice.

So anyway, I have this appointment to get my Favorite Husband's car serviced, and running just a hair late, so I jump in said car and screech out of the driveway. And a quarter of a mile into the trip I come to a screeching halt as a family of woodcocks are occupying the street, perhaps in protest of Mojo's screeching around in her car. (Note to Mojo's Favorite Mother: No, she is NOT actually screeching. She is Exaggerating for Comic Effect.)

She hangs out with GIANT MAN-EATING BUGS, that's what she does!

AGES ago, and by that I mean YEARS, some Christmas I was struck by all the Christmas cards depicting the whole lion-lying-down-with-the-lamb thingie. Which is all very well and good. But every time I see one of those, I am reminded of the amusing Woody Allen quote: "The lion and the lamb may lie down together, but the lamb won't get much sleep."

So at some point I decided to paint my OWN lion and lamb card, to illustrate the Woody Allen quote. But when I was done, I found that--while I like him (much better than the lion, by the way; the lion kinda sucks)--my lamb did not look at all frightened, and hence he did not really depict worried insomnia at all. So instead I ended up captioning it with another sheep-inspired truism that I felt DID capture the essence of Mojo's Little Lamb:

If you've ever wondered how Mojo became the enchanting and bewitching lass that she has become, wonder no more.

The only immediate family member from Mojo's youth to escape this seasonal wrath was her Favorite Younger Sister, who is represented via proxy. That's because Mojo did not have any decent pictures of her handy, and those I found on the internet tended to be crowd shots of her as a single face in a sea of faces. Because that's the sort of questionable life she leads. Not that Mojo judges. Not to her face, anyway.

If you're scrambling for holiday gifts and you're looking for something not too expensive that will require VERY LITTLE THOUGHT OR EFFORT on the part of you, the magnanimous giver, Mojo oh-so nonchalantly suggests you buy one or two or a dozen or so of her books she has recently put up for sale at fine booksellers everywhere.

These are actual books written by our beloved Mojo, mind you, not a stupid compilation of blog posts you can read for free, or crappy books others have given her and now she's foisting off on people who just want something that once resided, however briefly, in Mojo's hot little hands. No--real books; novels, as a matter of fact. So tell your friends, wake the neighbors, and rip 'em apart on the reviews on Amazon if you have the notion. (You could say NICE things about them too, if you like, but when was the last time Mojo ever said anything nice about YOU, huh? I rest my case.) 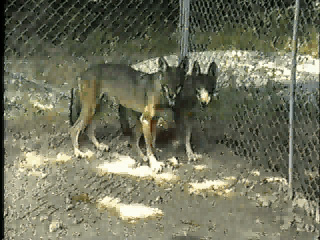 Just when you thought Mojo couldn't POSSIBLY get ANY cooler (uhhhh, you WERE thinking that just now, weren't you?), Mojo has gone back to her private vault of experiences to bring you her tenure at what used to be "The Wolf Sanctuary", more formally known as the Wild Canid Survival and Research Center at Wash U's Tyson Research Center in Eureka, MO. Being the charming lass she is, Mojo got permission from various Authority Figures (heh heh--suckers) and spent many an hour communing with wolves, well before it became oh-so-super-trendy to do so. (And eventually Mojo accepted the simple fact that the wolves, as noble wild creatures of intelligence and discernment, have no particular desire to commune with HER. Which is a lesson many a nature-lover has yet to learn, it sometimes seems.)

(The WCSRC has since changed its name to the Endangered Wolf Center; you can see what they're up to (and, hint hint, donate!) at http://www.endangeredwolfcenter.org.)