Okay, how's THAT for an obscure reference there in the title?

So Mojo had her Favorite Young Friend over for the long holiday weekend. Ordinarily kind, thoughtful, cautious parents know better than to leave their impressionable young ones with Mojo, but these parents have the unfortunate circumstance that they are related to Mojo, and hence the Favorite Young Friend is left with a rather nonchalant "eh, try not to kill him, 'kay?" in lieu of any actual instructions. So when it comes to kids Mojo just kinda makes up stuff as she goes along--which, it turns out, is how my sainted Favorite Mother raised me, at least according to HER. (It's rather disconcerting, as a reasonably happy, productive and successful member of society, to try to commend one's mother for raising you properly, only to have her shrug and say something along the lines of "It is indeed a miracle, because *I* sure didn't know what the hell I was doing. I was just making stuff up as I went along." But once again I digress.)

So anyway, the latest kick the Favorite Young Friend is on is, he's decided he wants to drive a Jeep Wrangler with a winch and take it four-wheeling. Which just goes to show that he is indeed related to Mojo, for that was Mojo's Dream Car for most of her young adult life, despite my Favorite Mother's assertion that they are DEATH CARS owing to a cousin of mine being killed when one flipped over on her. Which was and is terrible, but Mojo was already smitten by the fellas on Mutual of Omaha's Wild Kingdom driving these four-wheelers like mad over the Serengheti, terrorizing the poor animals as they pretended they were helping them. Wee Lass Mojo was intrigued at the mere IDEA of cars driving where there were no roads, with all the bouncing and the tall weeds being mown down, and secretly longed to try it herself one of these days.

Mojo has been accused, at times, of being rather self-absorbed. To which I say: it is accusations like this that make me realize exactly WHY I follow the comic strip Mary Worth. Because as TERRIBLE a human being as Mojo might be, all she has to do is stand innocently next to good ol' Mary, and any accusations that MOJO is self-absorbed is immediately squashed. 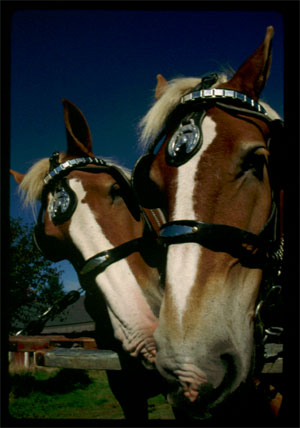 Here is Mojo being META-lazy! Reposting a repost of an old Usenet posting. But it's always been one of my favorites, and I like the purty pitchers. Plus, it's my blog. So there.

In honor of what is quickly becoming Mojo's Lazy Friday, I offer something I first wrote about on misc.writing back in 2000 or so, around this time of year. Hound had asked us how we celebrated autumn, and I blathered on and on about one of Mojo’s Horsey Days. Now with the beauty of "teh Innertubes" I have expanded the text a hair and added pictures I took on that day, from waaaayyyy back in the Stone Age of Kodachrome slides. Enjoy!

Last week I took a day off from work for the first time in about a billion years. A friend owned a pair of Belgian draft horses, named Ginger and Lacey. We called them The Girls. I helped groom them, bridle them and harness them. We hitched them up to a small hay wagon and spend most of the day giving hay rides to the foliage tourists up for Columbus Day weekend. Four dollars for adults, two dollars for kids, for a fifteen minute circuit through the Berkshire countryside.

A good message from The Bloggess:

http://t.co/7ScufKo0QA If you can, consider donating to your food bank to help others during the #govtshutdown.

Ordinarily, when I receive spammy, moronic emails, they go right in the trash unread. But once in a while, one is ALMOST good enough to post online and put it through Mojo's special patented Automated Spam Algorithm to see how it stacks up. I'm thinking of offering this as a service to others, assuming they would be stupid enough to pay me for the privilege. Then again, being the lazy sort, I probably won't. So consider this a ONCE IN A LIFETIME EXPERIENCE as Mojo reads this lovely piece of SPAM to you and tells you what it means.

(Oooh! Informal! Chummy! Why, we're supposed to like this person already, huh?)

You know better than most that putting your writing "out there" takes a tremendous amount of courage; readers will find and comment on even the simplest mistakes.

(Translation: Wow, Mojo! You know SO VERY MUCH, and you're so stwong and bwave! Yes, putting writing "out there" takes a TREMENJOUS AMOUNT OF COURAGE. SOOO much courage! I am AGOG with my own COURAGE. I am a LIONESS. Small children get up in front of class and give PRESENTATIONS on how much they ADMIRE ME. But…. wait. My readers almost NEVER find and comment on even the simplest mistakes! Perhaps… <sniff> perhaps they don't like me? Perhaps they don't CARE? Or MAYBE they are reasonably intelligent people who HAVE A LIFE and not all a bunch of pathetic grammar trolls who feel the need to throw a hissy fit over an obvious typo while pretending it's because they CARE SO MUCH ABOUT THE ENGLISH LANGUAGE? What sort of IDIOT READERS do you people attract? Oh, wait, now I'm CONFUSED! I must read on!)

At Grammarly we know the feeling - and we've made it our mission to improve writers' confidence.

(Now THAT's funny. Because despite this teary-eyed concern trolling about my feelings as a (gulp!) STWONG and BWAVE writer, a wee bit of further research (which is a fancy high-falutin' way of saying "I glanced at your FB page") reveals your mission THERE is more along the lines of encouraging others to behave like superior SNOTS when they are forced to commingle with the grammatically-challenged. As in, "let's shame and bully people if they don't live up to OUR standards of how people should communicate their thoughts and feelings! Post your screen grabs of others so we can feel better about ourselves!" Oh, hey, I wanna play that game, too:

(Yes, let's ALL enjoy a cruel laugh at Roommate Dumbwitz's expense! Haw haw haw. In humanity's defense, only ONE PERSON thus far (as of this writing) seems to have taken them up on their odious "roomiewriting" hashtag, so perhaps publicly abusing your poor roommate (above and beyond them living day and night with some obnoxious grammar troll) is NOT as incredibly funny as Grammarly thinks it should be. Tell me, is this manipulative, two-faced behavior actually WRITTEN UP in Grammarly's business plan, or did you just happen to stumble across it, perhaps around the time you stumbled across the idea that spamming total strangers in the hopes they might feel insecure about their writing is a good way to get more people to sign up for your service?

(Ya know (watch out, young people: crotchety old-gal rambling story alert!) I used to participate in a writer's newsgroup 'way back on Usenet--which predates this web-thingy by a coupla years (oh, man, you just KNOW colloquialisms are SOOO getting flagged by any automated process)--and an occasional running gag in the group was that a post criticizing and correcting someone else's spelling and grammar had to include at least ONE mistake. It was part of what was then called "trolling for newbies": purposefully making a rookie mistake so everyone could enjoy watching the way-smarter-than-thou types jump all over it. My own PERSONAL favorite tactic was to misspell the word "mispelled". HOURS of amusement, at least if you're ten and your mom won't let you play video games.

(But I digress. Back to Grammarly's MISSION to improve my confidence while pretending they're not also encouraging others to undermine it. Where were we? Oh, yes, "At Grammarly we know the feeling"… blah, blah, blah.

(Oh, hey, Grammarly can relate to my problems! Which aren't really problems, but they're pretending they are in the hopes that I will somehow relate. And they have a MISSION. Which sounds much more touchy-feely than "a business plan that entails surreptitiously undermining people's confidence in their writing ability so you can sell said confidence back to them". Because writing is hard, isn't it? By golly, it sure is! Especially when you've got a pack of giggling concern trolls nipping at your heals. (There. I GAVE you that one. I mispelled "heels". Or perhaps instead I totally misused the properly-spelled "heals". Wotta maroon either way, amirite? Haw haw haw. You're welcome.)

(In Sales 101 you must demonstrate to a potential customer that they have a PROBLEM that YOU ALONE can solve. I'm guessing this is it. Because a certain number of people ARE insecure about their writing abilities, and a certain percentage more will DEVELOP that insecurity if they are TOLD they should have no confidence in their abilities. I would argue, however, that the real problem here isn't the need to improve writers' CONFIDENCE. Some of the WORST WRITERS I HAVE EVER MET are just LOADED with the stuff. It's more the need to improve their COMPETENCE that's key. But hey, it's an easy mistake--they both begin with "C" and end with "ence".)