Mojo is not as stupid as she looks. Or acts. Or as the latest testing technology indicates. But even a brain trust such as Mojo is having trouble with this one.

I *THINK* it's a sugar bowl. But don't hold me to it. It looks like a miniature soup tureen, but the tray it's sitting on is a hair under six inches long, so that gives you an idea of its size. Mojo is not a fan of soup, and hence a teeny soup bowl like this would be preferable to the giant servings people expect her to eat (or is it drink with soup?) but since the world tends to do the exact opposite of what she wants she is pretty certain this is not for soup. Hence SUGAR bowl, though for the life of me I don't know why. 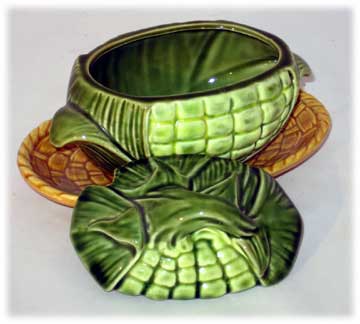 For starters, this is apparently meant to represent something. But WHAT? At first I thought it was an oddly-shaped, green ear of corn.Which has nothing whatsoever to do with sugar, unless you're thinking that awful too-sweet "butter 'n' sugar" corn. (Mojo is a fan of the classics, particularly Silver Queen.) Or if you're a fan of Corn Pops, which, when we were kids was called "Sugar Pops" and then, briefly, Sugar Corn Pops. (They didn't take the sugar out of the cereal, just out of the name--like Super Sugar Crisp--the one with the bear for a corporate logo--is now named something else. And Sugar Smacks became Honey Smacks. I have a five-year-old acquaintance who occasionally eats Corn Pops and I made the mistake once of calling them Sugar Pops and he jumped right down my throat. "Why did you call them THAT?" And you really can't explain the vagaries of corporate life to a five-year-old, even if you happened to understand it all as an adult.)

Anyway, back to the item for sale. Then I decided that, due to the weird topknot, it must be some sort of squash. Some squashes or gourds can be very knobbly, which would partially explain the reptilian skin texture. But squashes don't grow in a husk, do they? This is the sort of thing that keeps Mojo awake at night. It is ceramic. There are no marks on it except for an especially burned smudge on the bottom that might have been a mark prior to firing, but is now just a scorch.

The uh, thing is permanently attached to the little ceramic faux baskety platter it is sitting on. There is a little notch in the lid for what I assume would be a spoon handle. The whole thing is about the size of your hand. I'm selling it as a sugar bowl, but I am open to brighter, more informed people who might right now be rolling their eyes at my idiocy. Anyway, if you would like a sugar bowl (or, like, whatever) shaped like ...ummmm, like, ... uhhhh, like something from Invasion of the Body Snatchers, then by all means bid on this priceless antiquity. Although you've got me how old it is. It was my Mother in Law's, and I can't get anything out of her. And to be honest I am getting somewhat depressed seeing stuff like my childhood toys appear on eBay as "antiques". Especially since I PLAYED with mine and destroyed them, when evidently I should have kept them pristine in their boxes and only looked at them under glass. Stupid kid. Bid early, bid often, and be the first on your block to have a, uh, thing on your table.

New fan here! I believe the bowl may be for melted butter for corn on the cob?

That's a possibility! Though I've never seen butter pre-melted for corn on the cob, since the dipping might be problematic. Lobster, yeah, but all the butter I've seen for corn is solid and gets slathered on with a knife.

Of course, what do *I* know--while I certainly like butter, I don't eat it on corn OR lobster...just eat 'em both plain. So it could very well be some sort of elaborate butter-application etiquette I am blissfully unaware of!