Mojo's Favorite Mother also used to collect sheep. Not anymore. At least, this is what I gather, since she has given me a huge box full of things she once collected and now wants to get rid of. When I ask her why all she says is "I'm throwing things away." Mojo likes to think that it is her own influence, simplifying her life through the Craptacular, now rubbing off on her loved ones. But there is also the nagging suspicion that her Favorite Mother has just found an excuse to send her boxes of crap. Which is it? Only time--or an irate phone call from her mother yelling at Mojo for something she said about her on the Craptacular--will tell. 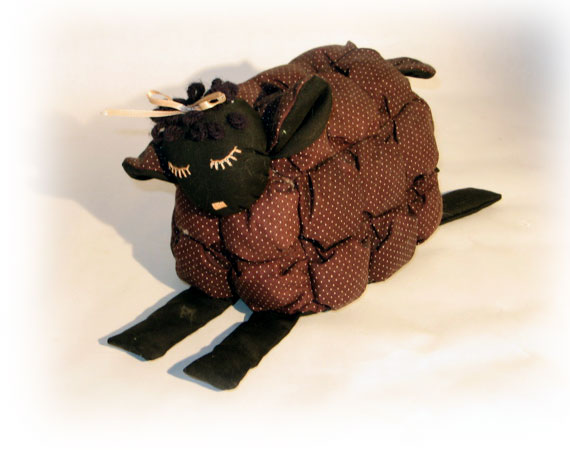 Years ago there was a trend of making these odd "puff" quilts. They were also called "biscuit" quilts. I don't recall the particulars, I just remember people for a while whipping out these buckets and buckets of "puffs" and then sewing them into quilts. I was never fond of the look so I avoided learning anything about them. I never see people doing it anymore, so it was either a fad that faded away or I am just completely oblivious. Or both.

Anyway, part of the fun and/or annoyance of a fad is the thousands upon thousands of derivations as people milk it for as much as they can. It happens all the time. Name your fad, and watch as it degenerates into a thousand different things. Remember the "Slinky"? When I was a kid it went from just plain ol' Slinky to Slinky Puppy and Slinky Kitten. (I was given a Slinky Kitten for Christmas one year.) And nowadays there are rainbow slinkies and mini slinkies, blah blah, blah. Or Rubik's Cube. First is was just the stupid cube, and then it was cubes with patterns or pictures instead of just colors, and then the Rubiks people started coming out with all sorts of weird Rubiks products.

The same thing happens with quilting trends, dontcha know. So someone came up with or rediscovered puff quilting and for a while everyone and their aunt and uncle were whipping out puff quilts. And then they started coming up with other "uses" for the puffs. You started to see classes for puff wall hangings and puff dining room curtains and, eventually, puff stuffed animals. Of which this sheep is a prime example. Lovely brown-with-white-polka-dots fabric and black extremities and a kicky pink bow to top her off. At least I assume it's a girl, due to the pink bow and the eyelashes. If it's a boy sheep I imagine he would be mercilessly teased by the other sheep. Sheep are mean that way. Sure, they look all cute and big-eyed and like they wouldn't hurt a fly, but when you turn your back that's when the teeth and claws come out.

I can't believe I got this far with my mother's sheep collection (I think this might be the last one!) without remembering a graphic I once did. I will include it here on the bottom after my gratuitous mention of the Certificate of Craptacularity. You know, Certificate of Craptacularity, blah blah blah. I should have prefaced every sheep auction with this graphic to set the mood, but as usual Mojo is slow on the uptake and she missed her chance. It was a watercolor I did once years ago in response to one-too-many "the lion and the lamb shall lie down together" Christmas cards I recieved. Yes, despite her obnoxiousness Mojo does occasionally have friends who send her Christmas cards. Even when Mojo demonstrates her complete lack of thoughtfulness and gratitude by sending them this in return: 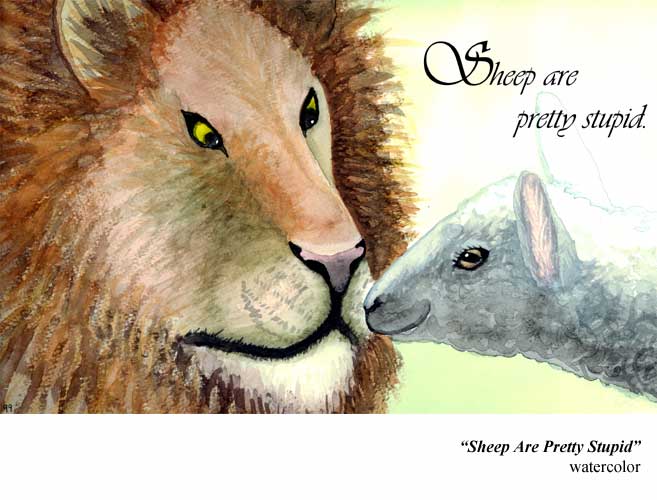