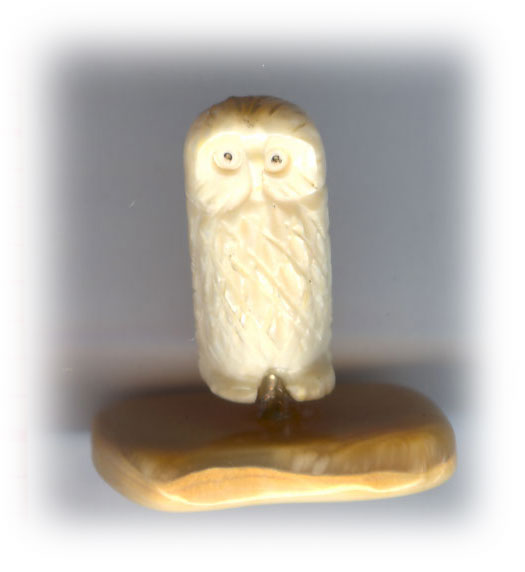 Mojo does not know or remember or particularly care if her Favorite Mother's Owl Collection was something her mother actually wanted to collect, or if it was intially or subsequently foisted upon her by a large family desperate for ideas for holiday gifts to give her. All she knows is, now her Favorite Mother no longer wants or needs or desires her Owl Collection. So Mojo's Favorite Mother cunningly foisted these things on her Forgotten Middle Daughter, in a pretense of supporting the Craptacular, but we all know the reality is, it saved her a trip to the dump. And now these things are cluttering Mojo's house instead of her own, heh heh heh. Now you see where Mojo gets her cunning, cleverly wrapped as it is in a verbose folly of ineptitude and greed. And you can also see, perhaps, that Mojo is no match for her senior when it comes to wheedling manipulation and distraction techniques while foisting crap upon a gullible subject.

TAH-DAH! We MADE it! The LAST OWL AUCTION EVER! Well, at least as far as Mom's Owl Collection goes. At least so I hope. Time to get out the champagne and celebrate! Whoo-hoo! No more owls! I would like to thank the Academy, and all the fans...

Oh, wait. I still have to list the stupid thing, don't I. Sigh. Time to get out your magnifying glasses, people. I am NOT kidding. I don't know why I saved this owl for the last, but there you have it. Looks like an owl, don't it? Yep. That's an owl, Mojo, you are saying. Why should I be particularly interested in this one? Okay, prepared to be amazed, Craptacular fans. For Mojo is about to make her eBay debut. At least a part of her. Watch as I cleverly stick my thumb into this shot so you will have a better perspective: 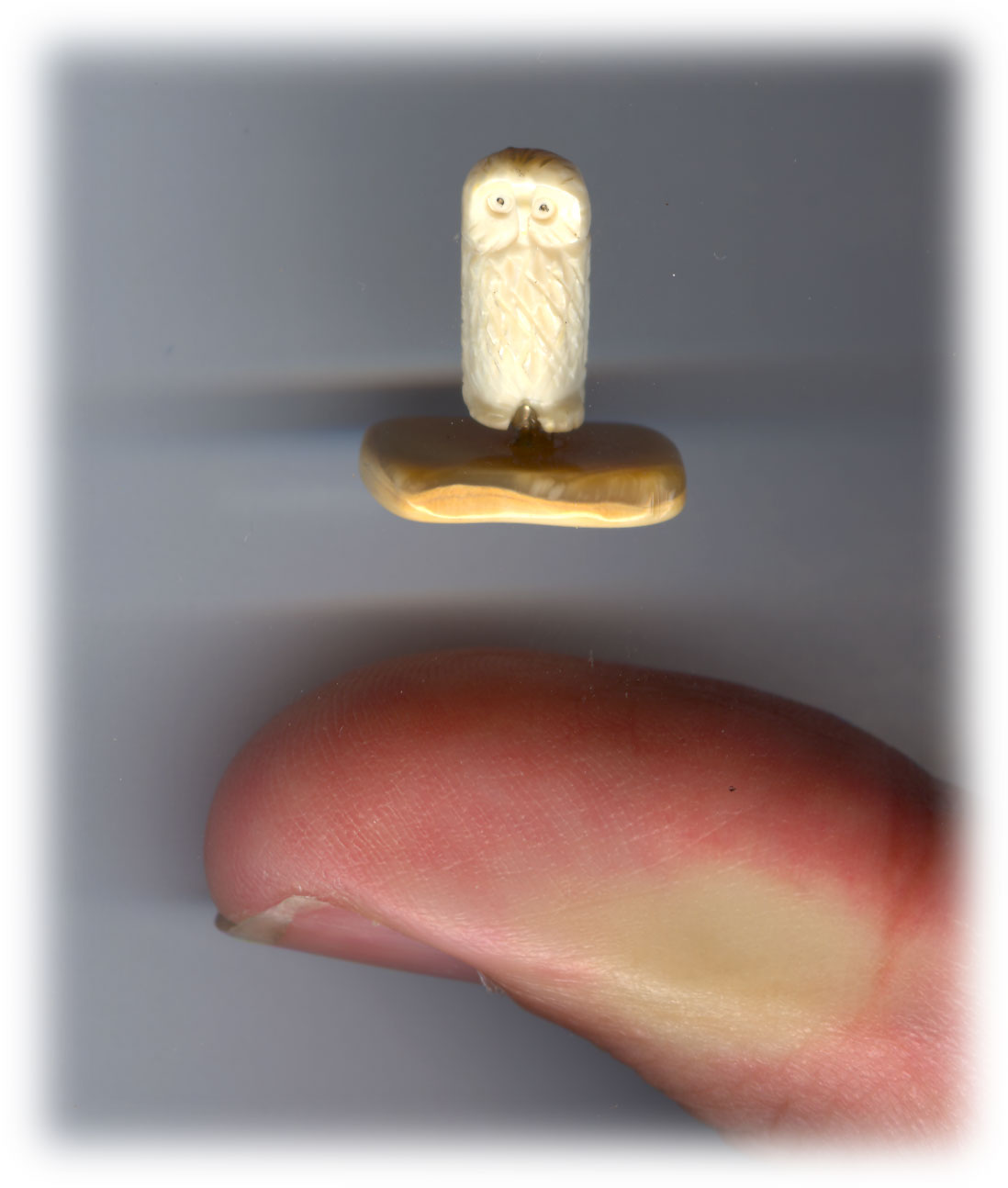 One of the tiniest owls I have ever seen. He is about a half an inch tall. Do not mistake him for food, although I suspect nothing much would happen to you should he accidentally be ingested. I tried and tried to take a picture of him with my camera, but finally I gave up and threw him on the scanner and scanned his feathery behind. And speaking of feathery behinds, here is his, being scanned next to my trusty see-through ruler: 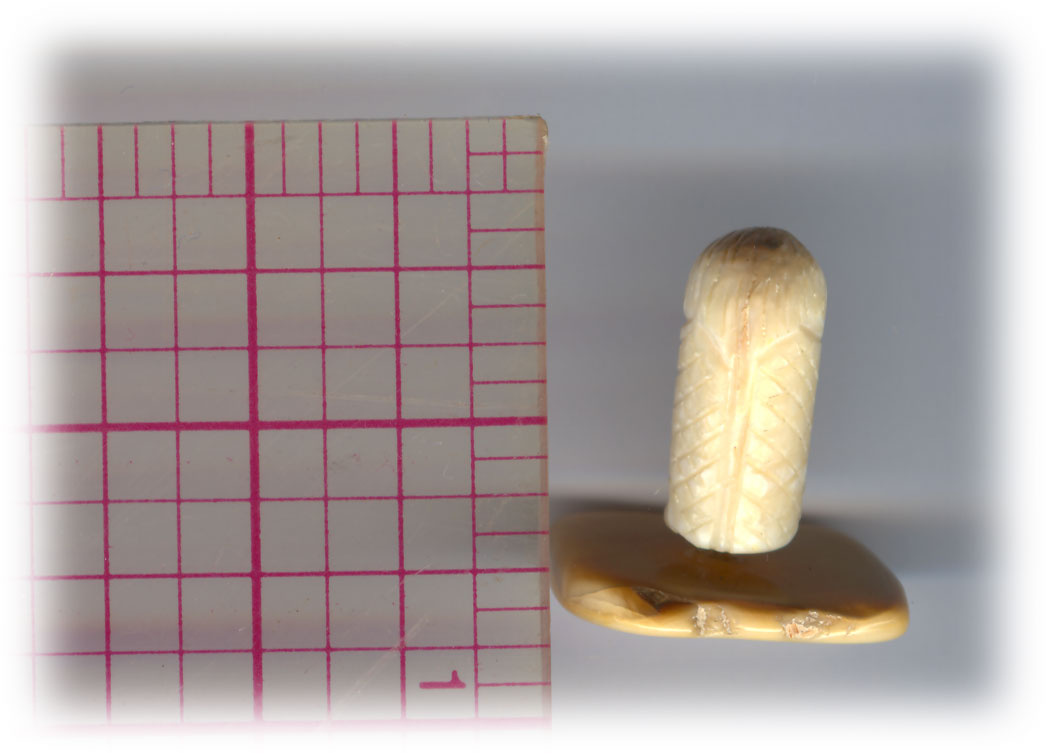 Half an inch tall, as you can see, and carved within an inch of his life. I'm not quite sure how the measurements work out with something like that, but I suspect calculus is somehow involved, so I will leave the math up to you. Tiny, tiny guy. I THINK he is carved out of bone, but I don't know for certain. I'm hoping it's not ivory, but I don't remember this fellow being around when we were kids and ivory's been illegal at LEAST since my childhood in the Sixties/Seventies if not before, so I suspect it's bone. It looks like the little base he is attached to is some sort of thinly-sliced polished rock. This is just wildly guessing, using my innate knowledge of geologic and biologic materials, which sounds really impressive until I admit that I can only tell really obvious rocks apart, like quartz and mica, and anything that appears sedimentary I just call "sandstone" or "that soft red rock we used to use for chalk on the blacktop when we were kids". This is not that.

Where did he come from? Who carved him? I dunno. But he's yours if you want him. Oh, and if you bid on him. And win him. And if you do want him and bid on him and win him, of course he will come with his very own Certificate of Craptacularity, beside which he will look even smaller than he does next to my thumb. And no, that is not the thumb I injured during the Original Holiday Craptacular CSL auction. (If you don't know that story, go to the mojocrap blog and search for the phrases "pouring blood" or "bloody sneakerprints" and you will find it.) The one in the picture there happens to be my left thumb. Because that's the way the scanner worked out when I was trying to run the software one-handed. Here, if you would like to see the CSL scar, I will include the following graphic for your edification, assuming you now don't stalk me by virtue of recognizing my hand: