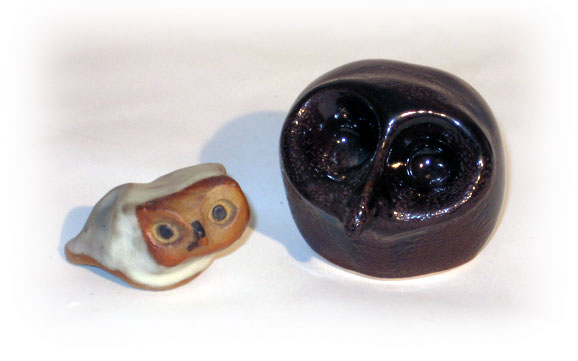 Mojo does not know or remember or particularly care if her Favorite Mother's Owl Collection was something her mother actually wanted to collect, or if it was intially or subsequently foisted upon her by a large family desperate for ideas for holiday gifts to give her. All she knows is, now her Favorite Mother no longer wants or needs or desires her Owl Collection. So Mojo's Favorite Mother cunningly foisted these things on her Forgotten Middle Daughter, in a pretense of supporting the Craptacular, but we all know the reality is, it saved her a trip to the dump. And now these things are cluttering Mojo's house instead of her own, heh heh heh. Now you see where Mojo gets her cunning, cleverly wrapped as it is in a verbose folly of ineptitude and greed. And you can also see, perhaps, that Mojo is no match for her senior when it comes to wheedling manipulation and distraction techniques while foisting crap upon a gullible subject.

Now we are getting into the weird-but-still-cute-instead-of-creepy realm of my Favorite Mother's owl collection. These two guys are still on the small side, but they have a bit more character than the manufactured-type of ceramic owls I have been showing you. At least I think so. As usual, your mileage may vary. 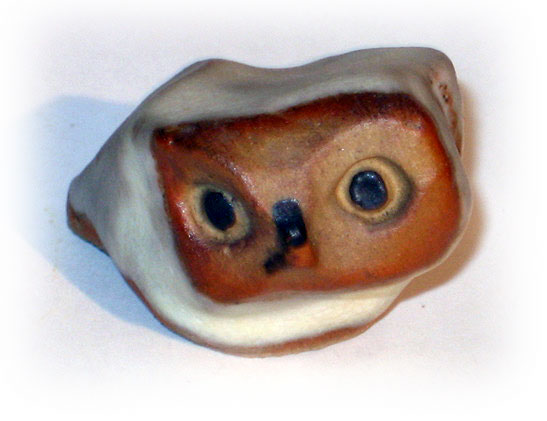 And that's what makes the world go 'round. No, wait, that's money. It's the spice of life. Yes, that's it. Variety. Spice of Life. Though some people seem to like their lives as un-spicy as possible. Not Mojo. She will endure all manner of things. Of course, she complains bitterly about most of them, but it's all a bunch of hot air. Really, if she lived in a world where she had nothing to complain about she would soon die of boredom. And as much as some of you might like that, Mojo herself would rather not.

First up in our Cavalcade of Whimsy (dang it! Another Simpsons reference! Won't she ever stop?) is a fellow that I first thought was just a painted rock with eyes drilled into it. But no, I think it's clay. Oddly enough, it appears to be solid, which does not jive with Mojo's limited knowledge of clay--in particular, most items made out of clay need to be hollow because if there is any moisture hiding deep in it the moisture will turn to steam and the piece will explode in the kiln. And while some people might think it's cool to have stuff explode, if you are a master pottery craftsman it's not such a good thing, since the kiln contains all your other stuff you are firing at the time. Totally not cool. But it appears to be solid. Maybe they just dried it out really well before they fired it. Or maybe there is a secret hollow space I am not aware of. Anyway, it looks like a rock, but it is a lump of clay cunningly shaped and painted to look like ... you guessed it ... an owl. 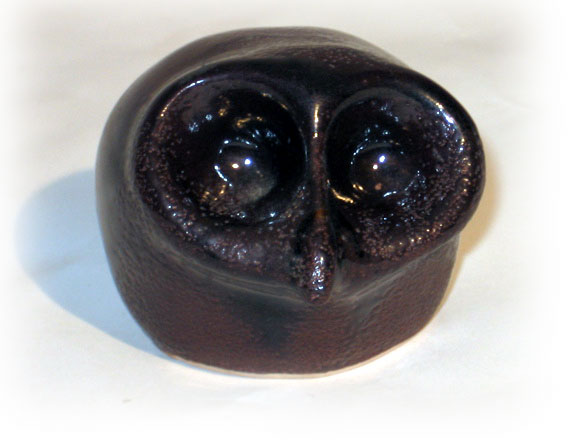 Its companion is probably one of my favorites in the whole Owl Craptacular. If this fellow was six feet in diameter instead of two or three inches I could see him hanging out on Easter Island with all the giant heads. I don't know why he reminds me of Easter Island--a place I have never been, by the way--but he does. And I will say it right now: I like him. I know, you hardly ever hear Mojo admit that, but you've read it here now. Not enough to keep him, mind you, but he makes me smile. He is hollow, as pottery things should be, and stands about two inches high

If you would like him to make you smile on a daily basis you know what to do, dontcha. With these two of course comes the Certificate of Craptacularity, so you can proclaim to all the world that these are indeed Mojo's Favorite Mother's owls and not some cheap imitation. Because the online world is rife with forgeries and whatnot. But not in Mojo's world. No, Mojo lives in a world made entirely out of chocolate. And REAL chocolate, I'll have you know, none of that carob junk. And BROWN chocolate, like chocolate was meant to be, not that horrid pale wax pretending to be "white chocolate". Bleah. Why bother? So enjoy these owls--which are NOT made out of chocolate, which is one of the reasons why I must part with them, since they do not fit in with my chocolate decor--and have fun today. Mojo commands it!