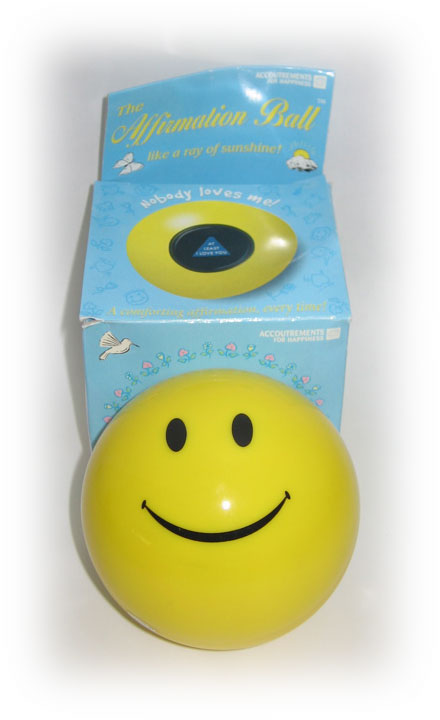 Toy Week continues here on the Craptacular with a new twist on an old favorite. Everyone who was anyone had a Magic Eight Ball when they were kids. Which is probably why Mojo did not have one. Sure, all her friends had a Magic Eight Ball, so Mojo could consult the spirits or Minnesota Fats or whoever it was that was conjured with the use of said Magic Eight Ball. But she herself never owned one. She wasn't deprived--at least not in this instance; just don't ask her if her parents ever got her a pony, though, or you're in it for the long haul--but she just never got around to buying one for herself or receiving one as a gift.

Of course as everyone who has ever used a Magic Eight Ball is well aware, you can't always git whatcha want. For every time the MEB told you "All Signs Point To 'YES!'" you were also sent messages of Supreme Disappointment, or--perhaps worse--a noncommittal mushy non-message instructing you to try again later. So actually consulting the MEB was not always the boon Mojo expected of her toys. What Mojo wanted and expected was a MEB that would invariably give her the answer she wanted, no matter what. Because Mojo dearly loves to get her own way all the time. And the traditional MEB fails to do this at least fifty percent of the time. Mojo finds this average unacceptable. 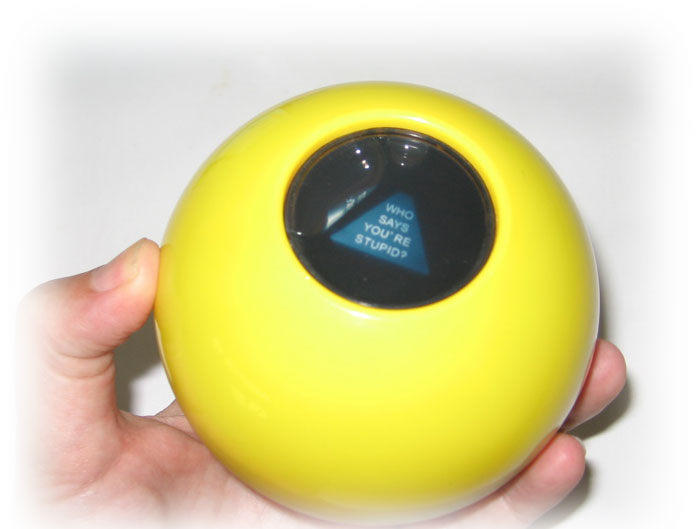 Enter this little number, given to me by a former employee attempting to curry favor. Instead of being a Magic Eight Ball, this is an Affirmation Ball. It is a happy smiley face instead of a gloomy black eight-ball. Instead of being a predictor it instead enforces what you already know deep in your heart about just how swell you are. So instead of suffering from cloudy futures or "It's Not In The Cards" disappointments when you shake the ball and flip it over, you only get positive messages to boost your fragile self-esteem. Everything from "Who Says You're Stupid?" (a popular one once Mojo is done talking to you) to "Your Breath Smells So Minty!"

This sat on my desk for many years back when I had a job, and it helped me through my consequent unemployment with its smiling face and relentlessly upbeat messages. So I guess technically it is indeed "used", but since you can use it as much as you like without any real consumption it's just as good as when it was new. I saved the box, too, for some bizarre reason. The box is a little mangled up, but still does the job as you can see. It's a box. A lovely baby-blue box with scripty lettering all over it in keeping with such a light and fluffy ball.

As if that is not enough--and it should be, seeing how Mojo is starting to suspect that she did NOT scratch her throat with an errant potato chip yesterday but instead is suffering from the beginnings of a summer cold--you get the Certificate of Craptacularity to further boost your standing in the community. And Mojo promises not to cough on either. Maybe it is just a scratched throat. I dunno--what does the affirmation ball say? "Have You Lost Weight?" Oh, great, some sort of wasting disease. That's JUST what I need....