What is evidently turning out to be Toy Week continues with another blast from the past! Mojo is again shocked this did not sell. You'd think she'd be used to it by now, but instead she takes it totally personally and after she has finished sobbing out her eyes she plots her revenge while poring over the old description, wondering what might have gone wrong.

Like this marvelous brain-building musical mat for your wee bairns. Perhaps calling it "annoying" may not have been the best choice of works to describe this item. So instead of blabbing on about how smart and precocious Mojo was when she was a tot, instead I will instead waste your valuable time and divert your attention from the item in question by describing the very first paying job I ever had. Which was being a toy tester for a certain nationally-known toy manufacturer who resided just one town and one state over from where Mojo grew up.

Seriously. Mojo was a toy tester. Again, Mojo does not lie. Her siblings were also toy testers, if you don't believe Mojo herself. Perhaps they will chime in with their own fond childhood memories on the mojocrap blog. In the meantime, you are stuck with Mojo, who, characteristic as always, is chock full of nothing but complaints.

For starters, it's not as much fun as you might think. First they make you watch lots of bad storyboarded commercials that all looked and sounded the same. The plot in the Seventies went something like this:

KIDS (staring out the window at the rain): "Gee, Mom, we're boooorrrrred!"

MOM: "Say! I've got an idea, kids! Let's play this nationally-known board game!"

MOM: "Don't thank me! Thank this new nationally-known board game!"

Then they let you play with the toys ... for about five minutes. And just when you are getting remotely interested in the game, you're ripped from one game and made to play another. They pick the games for you—you don't get a choice in the matter.

So you go on this "speed date" with about five or six different games. Some you know and love, others are prototypes. Then an adult takes you aside and asks you questions from a twenty- or thirty-page questionaire. I always campaigned that I was perfectly literate and I'd prefer to read and answer the questionaire myself, but no, they always insisted the adult had to read us the questions and write down the answers.When it was all over you got to pick a toy out of their catalogue (all the expensive ones, like a cool slot car track, were XXXX'ed out!) and then you were handed a sealed envelope containing a crisp new dollar bill.

The only new toy I tested that ever made it to market was Electronic Battleship, which was one of the few I utterly hated and totally panned in the questionaire. The one I tested was a prototype with a couple of flashing flashlight bulbs (again, this was in the Seventies) and someone sitting behind me with a series of electronic push buttons mounted on a piece of two-by-four. I might have been a kid but I knew what was going on before I even sat down. This version of Electronic Battleship didn't have any sensors to input where you put your ships (I don't know if future ones did or do), so they had me manually input each ship's position into the bogus fake computer even though (as I kept pointing out in my loud shrill child voice) it was not a working model and I was essentially punching numbers on a keypad for no reason. So we had to play until there was a hit, whereupon the adult with the buttoned two-by-four hit the right button and the game flashed and made cheesy explosion noises.

Even at the tender age of nine or ten (or however old I was), I thought they had taken a perfectly good game—Battleship was one of the first free games I got from them—and added a bunch of worthless, stupid, cheesy bells and whistles. So of course it just figures that was the one that made it to market. Just goes to show you what Mojo knows. In fact, I would guess that, if Mojo ever expresses her opinion about ANYTHING, if you bet on the opposite occurring it's a fairly safe bet. But I digress. 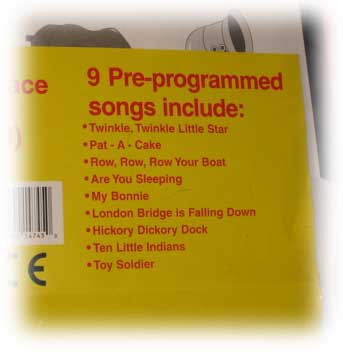 This is NOT Electronic Battleship. Whatever gave you that idea, anyway? Oh. I guess I did. Well, it's not. It's a musical mat that makes noises as it is stepped on or hit, hopefully by an infant and not by some easily amused drunk person. (Although who am I to judge the person who plays with this? Well, since it's a free country I may judge them at will. And I'm sorry, if this mat entertains a rational adult longer than, say, three seconds, I will probably judge them, at least in the privacy of my own head. And the results, sadly, will probably not be 100% complimentary toward said adult, in spite of Mojo's kind heart and gentle demeanor. But I digress.) Personally I've always suspected the little rascals have fully figured out cause-and-effect within the first month or two of being in the crib ("If I cry, they will come! Watch!"), but this mat will reinforce that teaching without straining their precious little vocal cords too much. For if you strain their precious little vocal chords, how on earth will they be able to argue with you when they get to be teenagers? Wait, that didn't come out right. I mean, studies done by the Mojo Institute for Brilliance indicates that toddlers who play with this musical mat are 87.578 % more likely to not annoy Mojo when they reach adulthood. I am not making this up. Except that last part. I mean, it's a totally bogus statistic in case you're wondering. And the Institute? Doesn't exist. But I sure made it sound impressive, huh? Once again, ladies and gentlemen, the power of professional copywriting.

This is an "Electonic Musical Mat", over three feet wide, with six different instrument sounds, nine pre-programmed songs and meant for ages 3 and up. It looks new, but the vinyl carrying bag has seen better days. If it is used, it is lightly used. I haven't taken it out of the bag. All I've done is turn it on and assured myself it makes noise. It does. Granted, your little tyke probably isn't going to start composing symphonies on this thing, but he or she will make a lot of very loud annoying noises which will please them and irritate the stuffing out of you. And you will then think fondly of Mojo's Craptacular and see the Certificate of Craptacularity hanging proudly on your wall and envision a Harvard or Yale diploma in its place. Yeah, envision away.