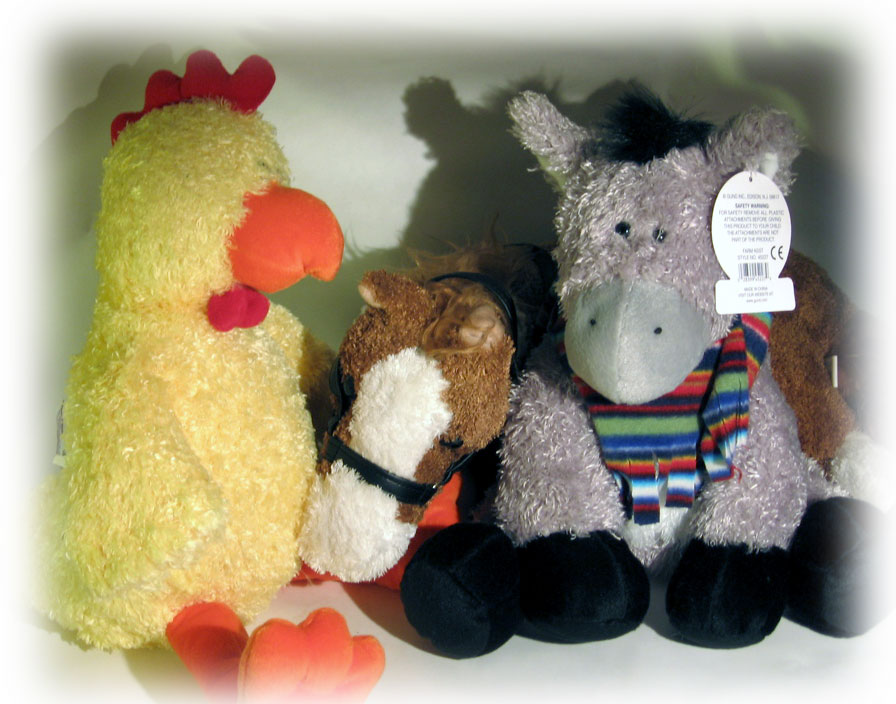 As those who know and love her best can attest--and they had darn well BETTER attest if they know what's good for 'em--Mojo can be generous to a fault. She is always buying presents for the young people in her life, as the exasperated parents of spoiled children know all too well. Mojo wants to be known as a "fun" adult, so she likes to buy things for her young charges and acquaintances so that she can then play with the toys by pretending she is playing with the child. And since usually she can outwit and/or outmaneuver a three-year-old, it is not too difficult to play for hours with their toys while they are stuck with an empty box. It's all part of making sure it is an appropriate toy for them. Because for Mojo, the quality of the whole experience is everything.

Unfortunately for Mojo (but oh-so-fortunate for YOU, gentle eBayer!) she is also, um, shall we say, inclined to forgetfulness, perhaps borderline stupid at times. She often buys lavish gifts fully intent on giving them to the intended recipient. But something shiny catches Mojo's eye on her way to deliver her gifts, or a passing thought wipes all others out of her pretty-though-somewhat vapid head. Whatever her feeble excuse, the end result is she forgets to give them. Time marches on, children grow into doctors and lawyers and construction workers, and all of a sudden they are less inclined to play with stuffed animals like they used to. Mojo thinks it is sad that adults do not like to play with stuffed animals so much, but Say La Vee. In short, Mojo then finds herself with these perfectly good, brand new gifts. 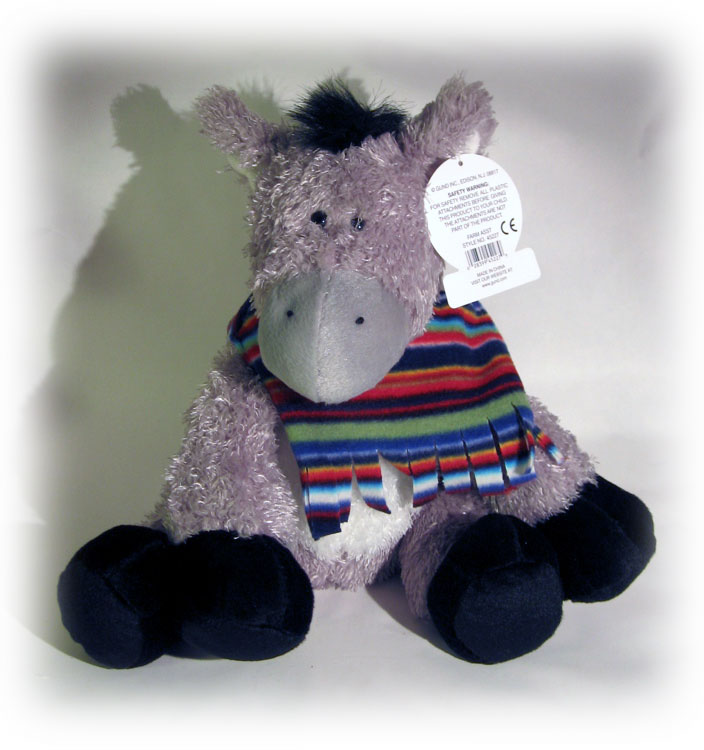 So she puts them into storage, because, hey, you never know when some kid will stop by and want to play. (My favorite story about little visiting kids is as follows: my Favorite Younger Sister, an animator, worked from the get-go on the show Blue's Clues and had access to "Blue" dolls for a whole year before they glutted the market with them. So Mojo had a Blue doll AGES before any children ever saw any. A friend's four-year-old child came over the house and Mojo knew the kid was a big fan of the show. So when the kid came over, after the usual jumping on the bed play, I got out my Blue doll and said "Hey, I hear you know my friend Blue!" The kid's face lit up like it was Christmas, as I expected. For about five seconds. And then a horrible look crossed his face. And he said, very accusingly, "What did you do with STEVE?"

(Like I had buried Steve in the basement or something. What do you say to that? I started stammering, which only proved to him I had done something totally dastardly to Steve, and I had stolen Blue from the show. His mother came up with a quick story that I was Steve's friend and I was caring for Blue while he went to the store or something, but I don't think the kid bought it. I think I traumatized him. But I digress.) 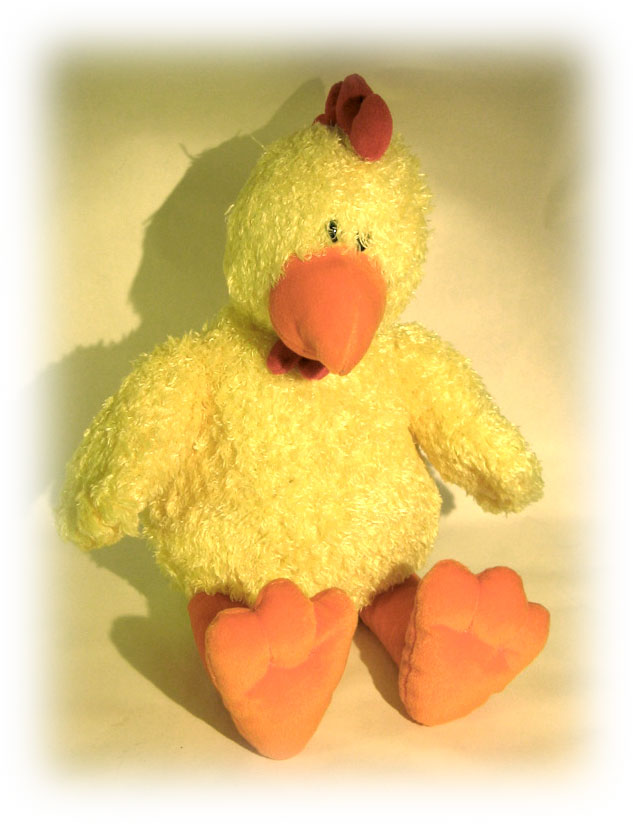 Anyway, Mojo keeps forgetting, and these items get pushed further and further back in the closet. And this is the sad result. I do not remember who these three were for. All I know is, he or she is probably now in graduate school or something. And these fellows have been sitting untouched in a plastic bag the whole time. There is a chicken, a donkey and a horse. I thought at first the chicken was a duck, but I've never seen a duck with a comb, so I assume he is a chicken. I guess it doesn't much matter if you are two or three, but Mojo likes things to be called by their proper names. Two of them--the chicken and the donkey--still have their tags on. They are Gunds. The tags say "Heads and Tales", whatever that means. They are very soft and squishy, which I suppose is why I bought them. They are both about a foot tall. The horsie is likewise very soft and squishy, but I don't think he's a Gund. He does not have tags. He has a little curry comb attached to his bridle so you can comb out his tail. 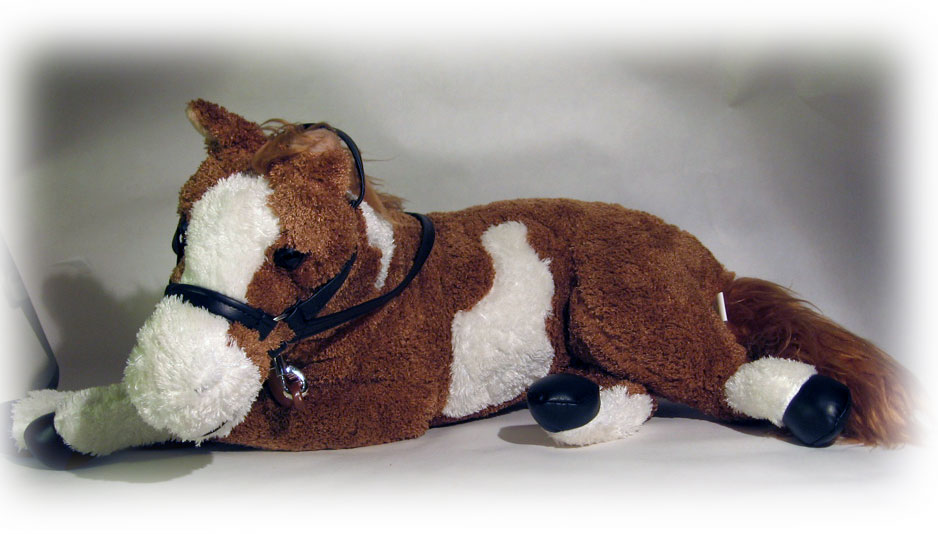 I'm quite certain all three are brand new. If I had brought them out to play with I would have taken off the tags, honest. They have apparently spent at least a few years in a white plastic trash bag all knotted up so they can't breathe. So they are spared the dust and pet hair that usually afflicts my possessions. As if that is not enough, they also come accompanied by...you guessed it! The Certificate of Craptacularity! Perfect for your stuffed animal paper-training needs. Come rescue these poor soft guys from a slow smothery death and give them to a child who might love them and drag them around a bit. Otherwise I will eventually feel obligated to do it. And that would just be plain sad, all the way around. So spare Mojo was little dignity remains and take these from her before she starts playing with them. Or at least be kind enough to ignore the barnyard noises coming from her house...