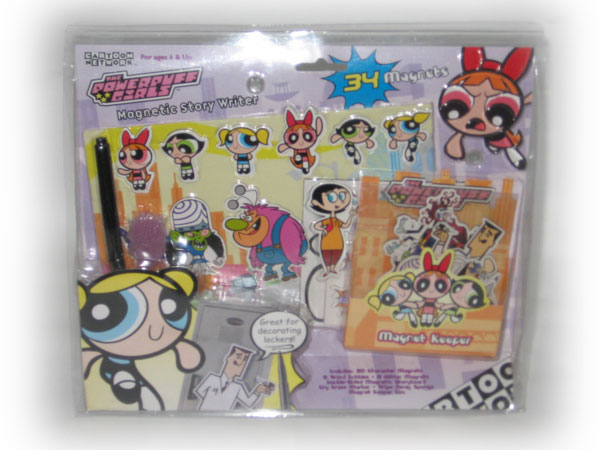 So people sometimes ask how Mojo got her name. Mojo was always "Jo" to her family when she was growing up. "Jo" is very simple to remember, and so long as you don't append an extraneous "e" on the end it's easy enough to spell. But the Favorite Younger Sister, who was an animation professional, was friends with Certain People at the Cartoon Network, and a big fan of the Powerpuff Girls.

Your friend Mojo, who lives out in the sticks and consequently cannot get cable, high speed internet access or any other basics of simple living without a special act of Congress. So she has only seen the PPGs through her Favorite Younger Sister's tapes and DVDs. She does not even know if they are still on the air. But she liked them well enough, what little she has seen of the show. Enough that Mojo herself wrote to her Favorite Younger Sister's friend at the Cartoon Network and started up an occasional pleasant correspondence with this individual. Which has nothing whatsoever to do with this story, but just goes to show you how Mojo will talk to just about any victim who is unfortunate enough to cross her path.

Anyway, Mojo's Favorite Younger Sister was particularly taken by the evil mutant chimp on the show, which as everyone knows was named Mojo Jojo. So much so that she attempted to get the entire family to call Mojo "Mojo Jojo". It did not take. Mojo was glad it did not take, since in her opinion there were two "Jo"s too many and hence too complex for Mojo's limited brain to contemplate. 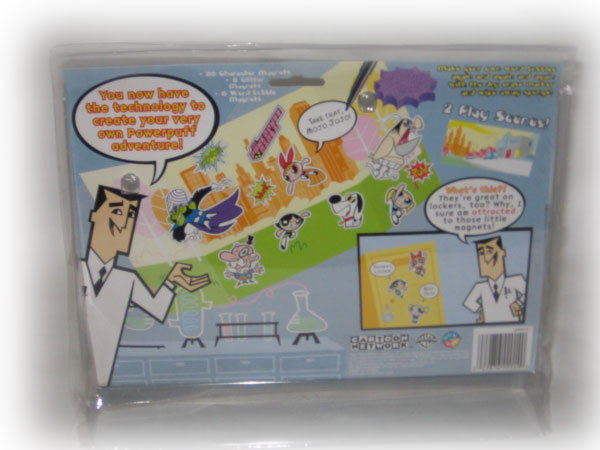 Fast forward to when my little nephew. When he started learning how to talk he pronounced my name as "Auntie Mojo" and he was just too darn cute to correct. (I cannot say whether or not he was coached. Whenever I ask the Favorite Younger Sister she just looks all innocent.) Since the whole family thought this was the cutestest thing in the world my Favorite Younger Sister came very close to getting her way because everyone in the family started calling me "Auntie Mojo". And the Mojo name stuck.

Anyway, if you are a fan of the show, here is your very own "Magnetic Story Writer". As it says, "You now have the technology to create your very own Powerpuff adventures!" Thirty four magnets comprising all the characters of the PowerPuff Girls, with thought bubbles you can fill in yourself. The packaging says it's "great for decorating lockers". That's all very well and good, but Mojo has not actually had a locker for well over 25 years, a fact she is rather happy about, since she prefers not having to wake up really early every morning to catch the bus. She still wakes up really early in the morning, somewhere between four-thirty and five, but she can just lounge around the house drinking coffee and chocolate instead of learning something.Q. E. D.

In addition to your PPG magnets you will get the Certificate of Craptacularity, which you can now hang proudly on your refrigerator with some 34 magnets. Or on your locker. Although make sure it's on the inside of your locker, because if you decorate the outside of your locker with your Certificate of Craptacularity, someone's probably gonna steal it. Because it's THAT cool. Honest. No, I mean it. But you'll never know unless you bid on it, huh?