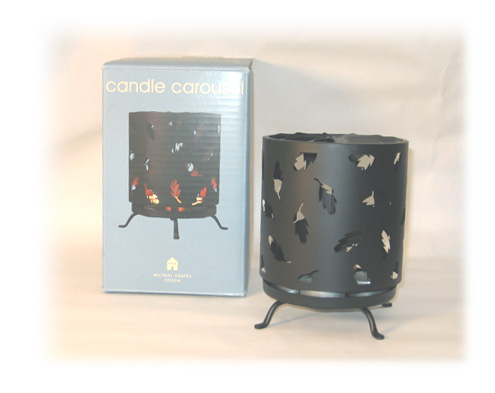 Mojo is always woman enough to admit it when she is wrong. Especially when being wrong so obviously cost her another lucrative sale on eBay. I mean, it's one thing to be wrong when human lives are at stake and civilization hangs in the balance. But when it costs Mojo money it is time for action. Time to admit my mistakes and move on and grow as a human being.

Take this item. (No! I will not add the cheesy Henny Youngman "please"! Mojo has her pride! Her dignity! You cannot make her revert to bad vaudeville routines!) You remember this. It's Mojo's "candle carousel". You light the candles, and the heat makes the carousel part spin and the light from the candles projects little shapes and colors on the walls of the room.

Lovely. Charming. Who wouldn't want this in their home? Apparently no one on eBay wanted it. And since you can probably sell used motor oil or useless instant cameras on eBay, why couldn't Mojo, at the height of her copywriting skills, sell a simple charming little candle? My professional copywriting instincts suggest it might be my describing it in the headline as "nightmare-inducing". But that's just a theory I have not yet tested. 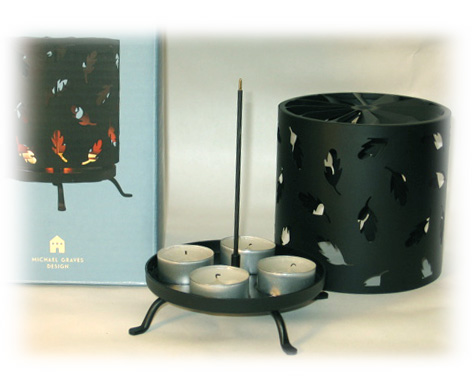 Of course, it is only nightmare-inducing for Mojo, who, as was related in the item description, apparently has some childhood issues about fire safety. But that shouldn't apply to your average well-adjusted adult, now, should it? So Mojo is led to believe that her skills as a marvelous Painter of Words worked against her in this case. She so filled the reader with the horrors of lax fire safety in the house I'm sure NO ONE wanted even a picture of a flame in their homes after she was through, let alone feel inclined to buy a lovely relatively harmless candle carousel. Even though Mojo invoked the names of her personal animaton gods, Hayao Miyazaki and Frederic Back. I mean, if you like beautiful rich animation like that, don't you deserve an equally lush animated candle carousel to spin quietly around as you watch them on TV? It will make the watching all the more magical.

I don't know if the candles are scented or not. Do we really have to get into that every time my anosmia comes up? It's always the same questions: "What, you can't smell?" (No.) "You mean you can't smell ANYTHING?" (No. I cannot smell anything.) "You mean, you can't even smell (insert your favorite stinky substance here)?" (What part of "No" don't you get?) Trust me, no one's interested in that unless they're an endocrinologist. And then, let me tell you, I am UTTERLY FASCINATING. 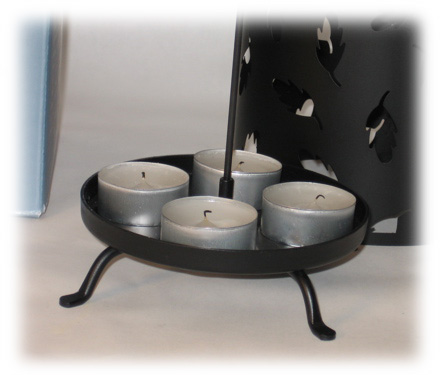 But it's different with endocrinologists. In fact, they sort of treat you like a paleontologist treats a tyrannosaurus skeleton they find in the desert. At first. There's a sort of weird circus-freak aspect about it I find disquieting. "I read about Kallmann's in med school, but I've never met one before," this one doctor gushed. He smiled at me and tried not to stare. "I wish so-and-so were here to meet you," he finally added. "He's going to be so thrilled when he hears about you." But then when they find that except for the Kallmann's Mojo is painfully average in all other respects it's rather a letdown for them, and their disappointment is almost palpable. But I digress.

The candle carousel. Lovely, wonderful, splendiforous, magical, ..uh ... cromulent candle carousel. (Dang! I promised myself NO SIMPSONS REFERENCES for a while! You'll have to Google "cromulent". It's not in any dictionary I know of...) To make this gift even more craptacular--I just politely thanked the giver and threw it in the corner and did not look at it until just now when I wished to rid my house of it. And guess what! It's USED! Yes, indeedy, as you can see by the candle wicks, they are burned. Not much, perhaps, but it's been lit. Maybe they were burning it in the store. Still, whenever I receive a gift that is obviously used it warms my heart like nobody's business. TRULY craptacular. It fully deserves the Certificate of Craptacularity that will accompany it to its new home.

So bid early, bid often, and enjoy the splendor and cromulence of your lovely non-nightmare-inducing candle carousel. May it shine only on your happiest dreams, and not set fire to your curtains.