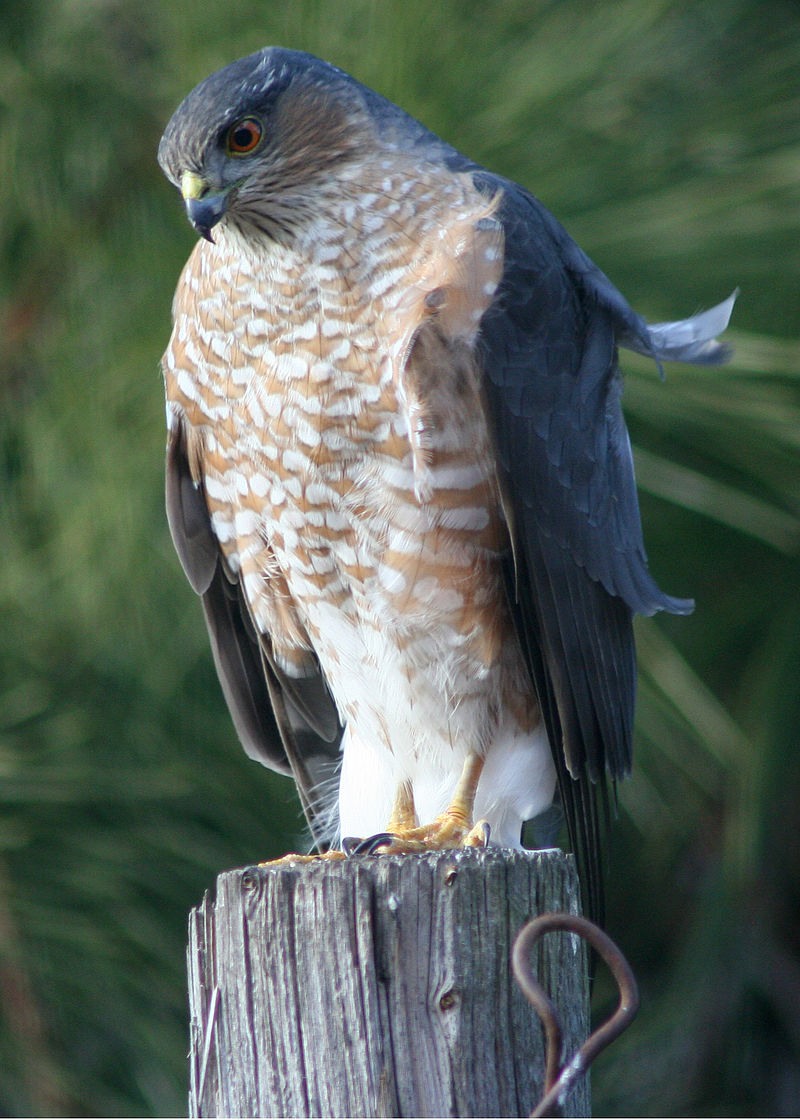 It is now officially spring, and as I drive through the mud bogs that used to be our road and I see the roadside ditches now filled with spring runoff of the snow (there is still half a foot or so on the ground; snow does not give up easily) I am reminded, of all things, of the Cooper's hawk that claimed a section of our road one year, maybe fifteen or twenty years ago.

Every spring afternoon, as I would drive home, there would be a quarter mile or a half mile or so where I was escorted by this hawk, winging in the air some twenty or thirty feet in front of my truck, as if he were making sure I was just passing through and not setting up camp in the middle of his territory. And every day, for three or four days in a row, I would watch him fly in front of me, and I would smile in the familiarity of it all, and feel this kinship with all living things, yadda yadda yadda. Because even those of us who know better are not immune to romance, and there is perhaps nothing quite so romantic as connecting with some wild beast as equals, journeying through this magnificent life together for a brief moment.

On the fourth day, right on cue, there was my Cooper's hawk friend, winging his way before my truck. And then he suddenly stooped down and tackled a blue jay out of the air right onto the road, no more than thirty or forty feet in front of me. I stopped the truck and watched as the two tussled--the jay was half his size, but he was fighting for his life and made quite the valiant attempt--and when the hawk arose from the road once more there were two pairs of beating wings. Yes, the poor jay was still alive, and not giving up the ghost.

The pair proceeded to fly in front of my truck, only ten feet or so off the ground, awkwardly darting back and forth as each attempted to gain control. I kept up with the truck, wondering how the jay could do this. A hawk's strike is a terrible thing, a cross between a massive body punch and a multiple stabbing from a double set of very sharp steak knives. Few prey animals survive the initial blow, let alone keep fighting and flapping like a champ. For maybe ten seconds , even though I am a big fan of raptors, I kinda rooted for the blue jay, who was probably too injured to survive even if he got away. Because it's a very American thing, isn't it, to root for the underdog.

And then, to my utter horror, the pair lurched rather violently to one side and dropped like a stone into the water-filled ditch on the side of the road. I was afraid, at first, that both birds were going to drown, and I marveled a little that I alone was witness to such an odd way of predator and prey to die together. Sometimes raptors' talons really lock down when they strike, and they have trouble releasing their grip. If their prey is too big they're in trouble.

The hawk sat shoulder-deep in the cold water, wings spread a little over the surface. He eyed me most balefully as the truck came to a stop, but did not move. I unrolled the window. (I live out in the sticks. No one else would be driving by for HOURS.)

"Do you need help?" I asked, since that is the polite thing to do.

So I pulled the parking brake, wiggled the gearshift to neutral, carefully let out the clutch, and opened the car door, kinda wondering how to approach this beast filled with sharp bits, since I had no gloves in the car. I figured I would try getting him from behind and clamping the wings to the body, as you would a chicken.

I didn't need to worry. Once I stepped out of the car and became human he flew out of the puddle and onto a nearby branch. The jay was dead in the water. So I got back in the car and left him to his meal.

This was no accident, it turns out. Cooper's hawks are known to drown their prey if it does not die right away and enough water is handy. It's what they do. But I gotta say, after experiencing it firsthand in that fashion--okay, not as firsthand as the blue jay, but still--it was pretty horrifying.  Especially since I was all daydreamy in the car thinking "Oh, hey, here comes my special hawk friend to escort me on the roa-- ERMAHGERD WHAT'S GOING ON THE HORROR THE HORROR"

So every spring, when the ditches fill with snow water and the vernal pools start forming, I think of this. Real life does not always fit the romantic notions.

And boy oh boy, some days it just sucks to be a blue jay.