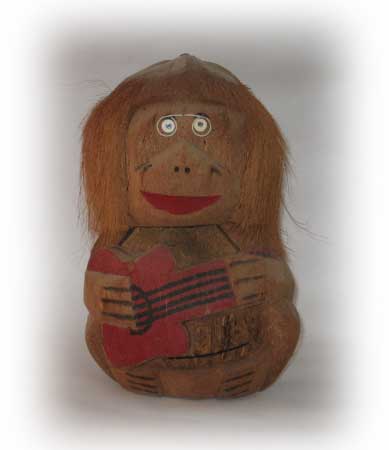 Unlike many people Mojo has never been particularly FOND of monkeys. She does not wish them harm, not with her Boundless Love for All God's Creatures, but all the same she would rather not be locked in a room with one if it could be avoided. Monkeys have always kind of freaked her out. They behave much like a very, very nervous human, and Mojo does not like hanging out with horribly nervous people. Mojo much prefers people who are cool and laid back, for they are less likely to react in a negative way should Mojo decide to tease them mercilessly or point out the various logical fallacies they may indulge in when publicly stating a position. (Not that Mojo really CARES one way or another; she just likes the intellectual exercise of picking things apart and seeing how they work. And she is always SHOCKED when people take offense to this. Which is why she mostly thinks things in her head now, or in eBay item descriptions, instead of indulging in Real Life interactions of that nature.)

So maybe, to be fair, it is not monkeys Mojo has a problem with, but rather any primate who jumps around screeching a lot. For she does not mind gorillas and chimps, so long as they are just hanging out and being cool and not having a temper tantrum and throwing things like King Kong in the remake (which isn't that great of a movie, and the animation is particularly uneven, but they spent most of their time on Kong and he does have one very well-done tantrum. And what's with all the obsession with Joseph Conrad, anyway? I mean, it's freakin' KING KONG, for heaven's sake! What's next—discussing the final scene in Hamlet during a teen slasher movie? But I digress). Once the screeching starts, no matter what primate is emitting it, Mojo wants nothing more than to remove herself from the noise as far as possible. This, combined with the nervous, jumpy movements such creatures employ, is a combination that makes Mojo not want to have anything to do with them. And the possibility of being bitten adds to the joy, let me tell you. For Mojo is not one of those stupid people who say, "Oh, look at the fluffy animal! I simply must go and pet it!" but instead has a great deal of respect for tooth and claw, and really doesn't want the "red" part of Tennyson's famous equation to be HER.

So while Mojo is benignly tolerant of most viewpoints and religions, whenever she heard of various cultures having monkey gods she was occasionally hard put to suppress a shudder. Not out of any religious intolerance, but simply because she finds monkeys rather unappealing for the reasons stated above, and while I suppose a monkey flinging poo is perhaps not so far off from Zeus flinging thunderbolts, Mojo would really rather not be the target of either, thank you very much. 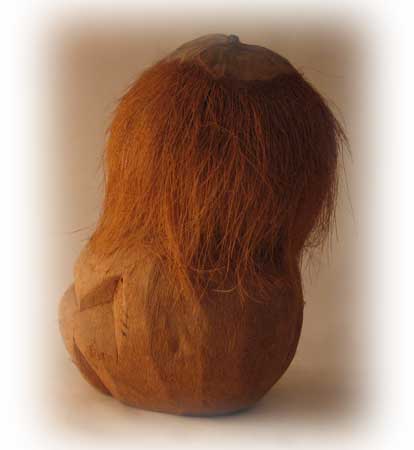 Until she met this fellow, that is. Now she sees the appeal. And now that she has converted to the siren lure of monkey gods, Mojo is following the proud tradition of commercializing her newfound beliefs by putting items of significance and symbolism up for sale on eBay in the hopes of making a quick buck. It is what the monkey gods have told her to do. They WANT her to be prosperous and materially wealthy, it turns out. Nothing pleases them more.And if YOU wish to please the monkey gods, you will bid him up to astonomical heights and take him home with you, where he will bless your house with screeches and tantrums like nobody's business.

I don't know how I got stuck with this. I suspect, during one of the many times in my life I have moved and my Favorite Older Sister volunteered to help, it was not so much out of kindness than the opportunity to fill my boxes with crap she did not want when my back was turned. I suspect my Favorite Older Sister becase a), I certainly wouldn't put it past her, and those who know her are now nodding in agreement, and b) this particular monkey god is holding a GUITAR. What is the significance of the guitar, you ask? I will tell you. My brother-in-law PLAYS THE GUITAR, and for a while there my parents would always give him guitar-themed gifts until it eventually dawned on them that he might have other dimensions to his life and personality they were neglecting. And about this time my parents went to Hawaii, which means this giant coconut beast was packed in their suitcase and lugged several thousand miles back home to the East Coast. Which makes it all the more special.

I remember that trip specifically because of my own craptacular gift-receiving experience. When my parents got back from a long trip the family would gather in the living room while my parents unpacked their luggage and hand out the many gifts they were required to bring us and regale us with the many stories and experiences they experienced while procuring said gifts. I received something like a ceramic mug or jar or container or whatever. The point of the story is, it was hollow, and designed with some sort of lid so I could not see inside it. I'm sure it was nice, whatever it was, for I don't recall feeling ripped off or anything. I thanked my parents politely and was just sitting in the corner playing with my gift (which just shows you how simple-minded Mojo can be—in those days you could have given her a cardboard box and she would happily play with it for a while; not like now, where she demands at least a very slight standard from the people who give her gifts), listening to the stories of island wildlife and watching others receive their gifts, when I happened to open the container. And there, inside, was a pair of socks. Used socks. 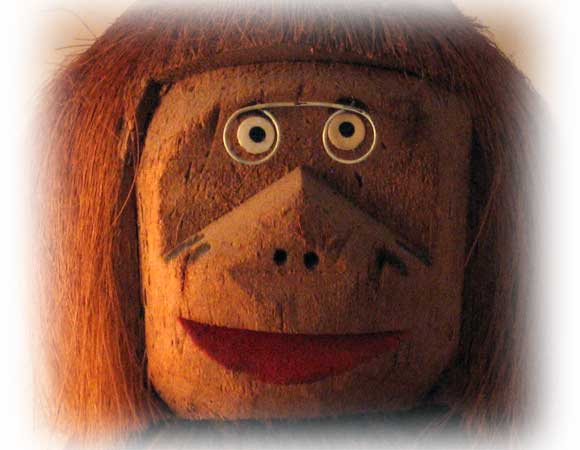 "Um," sez I, not wanting to throw a damper on things yet feeling the inexplicable need to point out this oversight, "there appears to be some dirty socks in my gift."

My mother looked over and said brightly, "Oh, yes, those are your father's. I was conserving space to make sure I could pack all the stuff I had bought for you kids." And then—for she evidently figured I was too slow to come up with this idea by myself—she added, "Um, you should probably wash that before you use it."

I mention this not because I suspect our beloved monkey god spent his journey wallowing in used socks (although oftentimes monkey gods are subject to all manner of tests and quests and Evil Doings), but just to point out that I think he came from the Hawaii trip, and I believe he was a gift for my brother-in-law, and at some point my Favorite Older Sister tired of the incessant demands monkey gods sometimes have on their subjects and cunningly foisted him upon me. When I confronted her she looked all innocent and was like "What? What coconut monkey? I don't know what you're talking about!" which further convinced me of her guilt, since, like I said, anyone that knows her realizes very quickly if there is mischief afoot she is invariably the Instigator. And right now she is probably reading this and saying "I can't believe she wrote that! I so totally AM NOT!" and to that I will just mutely sit back and nod at you with knowing eyes and rest my case and let her hang herself with her continued protests of innocence. Because WE know, don't we? Of course we do.

Anyway, if you are at that crossroads in your life where you decide maybe following the screechy whims of a monkey god is just what you need right now, boy oh boy do I have just the thing for the shrine you will have to set up in the corner of your house. Your very own git-tar strummin', bespectacled coconut monkey god, probably hacked into existence with a machete. I don't know, I wasn't there, but isn't that how these things are usually made? Anyway, this guy is guaranteed to just sit there and not trash your house like a real monkey would do. You just know he's an extra-smart monkey god because he's wearing glasses. He can sit on the table at breakfast and advise you on the stock market as you read the morning paper. Or in the evening he can charm you with songs from his native monkey land, accompanying himself on his guitar. You may not understand the subtle intricacies of singing monkey culture, since most of it will sound like "ahh, ahh, ahhh, EEEE EEEE EEEE EEE HOOO HOOOO HOOOO HOOOT!" but rest assured it is a special moment, this sharing of ideas and intellects, and you will feel a profound oneness with all beings as he serenades your family. (If you don't feel that, then you're just a heartless monster, aren't you?) All this, plus a Certificate of Craptacularity, too? Somebody pinch me, you are now thinking. Buy this monkey, and maybe he will! Because that's the sort of charming companions monkeys make. Pinching and biting and screeching. What's not to like?