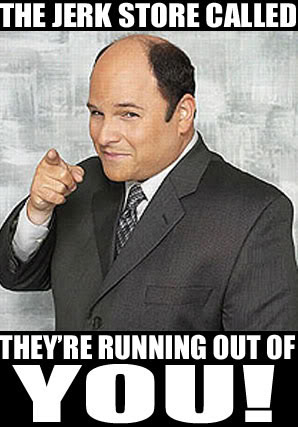 Mojo and her Favorite Husband often--to my perpetual shame--find ourselves using cutesy shorthand private jokes to make various observations. So that one of us merely turns to the other and says some very short phrase that sounds like a non sequitur, but to us it is Pregnant With Meaning, and the other knows immediately what is really being said. And, very sadly indeed, many of these are the product of popular television shows rather than something Lofty and Literary. Like "Jerk Store".

Anyone who has watched the show Seinfeld for any length of time immediately knows what the phrase means. And yet I was shocked, when Googling it, to see that the Urban Dictionary actually has an entry for it; there are several t-shirts and posters featuring it; and our cutesy little shorthand, if we actually said it in front of people, would probably be recognized by a great number of people. So much for us being so clever and original and whatnot.

One thing, though, before you get all bent out of shape should you hear us say it in your presence: we do not use the term "Jerk Store" as a convenient means of calling someone a jerk. I always agreed with Elaine on that count: the term "jerk store" is indeed just plain stupid. OUR meaning instead is much more in keeping with the original intent of the Seinfeld episode from whence it came. It conveys the ineffable, useless longing of getting in that last word--that one, final bon mot that will put everyone else in their place. If you come up with a "Jerk Store", You Will Be Victorious. Or so you honestly believe.

There's just one thing wrong with this desire. In real life IT NEVER WORKS. You are NEVER going to come up with that one argument, that one simple fact, that will render all opponents impotent. And yet you THINK you will, if you can just come up with something good enough. You can come up with the GREATEST ARGUMENT KNOWN TO ALL OF HUMANITY, but if you think for one second it is going to stop the argument, you are very sadly mistaken. Instead of dwelling in the glory of victory, you will be trampled flat.

Just recently we began discussing events in our own individual personal lives--yeah, like I'm going to tell YOU all about it--where we both individually have spent literally YEARS mulling around with our feeble little brains, casting about for the Perfect Solution to Solve This Conundrum And Make It Never Appear Again in Our Life. And you see this all the time, too, on the innertubes, particularly in political arguments: people think, hah, if I just make this ONE FINAL ARGUMENT no one can POSSIBLY refute it!!! And what happens? Is the argument over and a victor declared? Are allegiances changed and parties swapped and contrite apologies offered? No. Often as not the person you are arguing with merely IGNORES your perfect "Jerk Store" comeback, runs roughshod all over you, and your years of planning and scheming are for naught.

So now, lately, if one of us says "Jerk Store" to the other, we are not saying someone's a jerk. We are gently reminding the other that coming up with a Jerk Store remark is a futile endeavor, trying to get the other person to see your point of view and/or acquiesce to your obviously superior intellect. "Jerk Store" is our shorthand way of saying "Ain't gonna happen, bud. Best drop it."

Problem is, I intellectually KNOW all this, but I still catch myself pondering things, and imagining the moment I drop that one incredible comeback and all comers are instantly vanquished. It is a nice fantasy. It has NEVER HAPPENED ONCE. But a gal can dream, can't she?