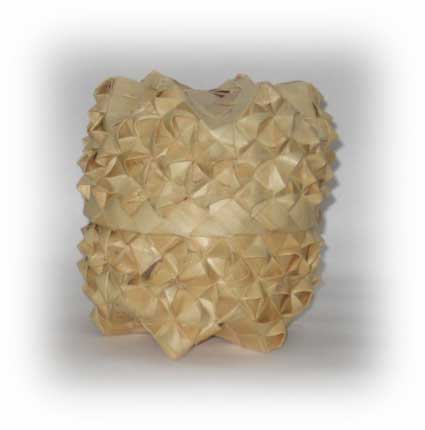 But first, I would like to waste valuable time discussing what I will call META-gifts. I have been on the varying incarnations of what is now considered "The Internet" for a long time--nearly twenty years. I used to work at a college, and for years before Certain Other People got involved and commercialized the net, all us college people were emailing each other and gophering and reading Usenet newsgroups using TIN and all that geeky unix stuff. It was all text-based with a command line at the bottom, which served as a sort of first-hurdle Darwin test to keep the truly incompetent out. But as people worked to make computers more user-cuddly and less frightening it opened the doors to all sorts of people, which has its good and bad points, like most things in life. But I digress.

Some days it surprises me--although it really should not--just how the more things change, the more they stay the same. As in, no matter how much the technology changes and all these pretty bells and whistles are added to the Computer Experience, discussions between total strangers on the internet STILL tend to go through several identifiable stages, from simple discussion, to another discussion, to eventual miscommunication or misinterpretation (or out-and-out trolling), to flame war, to fanning the flames, until eventually the discussion evolves into what is called a META-discussion, in which people start discussing the discussion instead of the original topic...for example, they might start arguing about how the argument began in the first place.

Mojo does not, as a general rule, believe in arguing--she sees it as a waste of her valuable time, time much more productively spent complaining in the hopes of getting her way--and she certainly sees little point in arguing with a total stranger, who not only is unlikely to let her get her own way but is furthermore very unlikely to give her gifts. So for the most part she is what I suppose they still call a "lurker", who sits lazily back and passively watches the fireworks the way some people watch soap operas. Sometimes she feels impelled to comment, and even composes whole arguments in her head, but since that involves initiative she is rather loathe to actually sit down and write 'em out, so instead she just pops a bag of microwave popcorn and checks her email again.

This whole boring digression is not to brag about how long Mojo has been online--although no doubt that explains to many why (at least in part) she is such a loser--but instead to introduce Mojo's exciting new concept of the META-gift. You see, Mojo receives more gifts from her voluminous family than she ever knows what to do with. They clutter her house and cause her to trip and generally make her life even sadder and more pathetic than you might initially think possible. And once in a while someone presents her with a gift that she does not want....whose sole purpose, apparently, is to store other unwanted gifts. Hence Mojo's concept of a META-gift: an unwanted gift meant to store unwanted gifts. 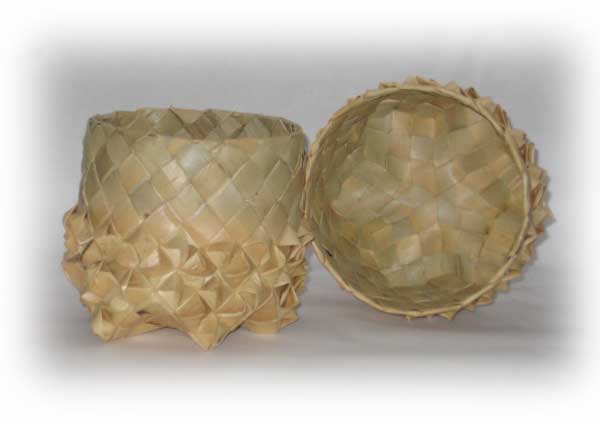 Here we have the perfect example of a META-gift. I think it came from Hawaii, but don't hold me to it. My parents went through a thing where they were island hopping all over the place and since they never brought ME along I lost track. I'm sure it holds Great Significance for them, but all it signifies to me is my Deprived Childhood where they never took me on these lavish vacations AND they never let me keep a pony in the garage no matter HOW hard I begged them. (Feel free to cry, gentle eBayer. I know, it's sad.) It is a little woven round basketey thing, about eight inches high and six inches or so in diameter. It appears to be made out of some sort of tropical frondy-material, although since I am not a botanist nor a forensic analyst of plant materials I cannot possibly tell you what it is or where it came from. If you have some sort of dire life-threatening allergy to certain frondy-kind of tropical plants you probably don't want to bid on this. But if you are looking for an odd little container to put your personal little oddments into, you can't beat this. Well, I guess you can, but if you did it would probably mash down into a big tangle of crushed fibers pretty quick without any sort of effort or exciting breaking noises. Hardly worth the effort.

Along with your tropical frondy woven basket container META-gift you will get the exciting Certificate of Craptacularity, which I suppose you could crumple up in a ball and store in your META-gift for a truly pointless exercise in futility. Or, if you are like Mojo, you will concoct some sort of wild story about how you procured this wonderful baskety container thing, and fill it with pirates and shipwrecks and mutineers. Your story, not the container itself, which is too small for even one normal-sized pirate. So move up from boring old regular gifts into the exciting new world of META-gifts! All the boredom of Mojo's regular crap, only MORE so!