Our first house was built and owned by a packrat. He grew up during the Depression, so he learned to make do with what he had and never throw anything out. The result we inherited was an absolute mess. The yard was literally his dump—for forty or fifty years he would merely walk out the back deck and fling things. When we opened up the walls in the act of re-doing the house, we found fifty-year-old newspapers used as insulation, and (literally!) extension cords plugged together in place of the standard 14- or 12-gauge wiring those silly new-fangled modern codes demand. It was a wonder the house didn't catch fire.

And I won't go into the tons of debris we removed from the property. Most of it was utter junk—stuff even Mojo's Craptacular won't touch. But once in a while we would find something kinda cool amidst the crap.

Like these. We found a bunch of these bear-shaped bottles buried in the back yard. It's a wonder they survived intact, but they did. I looked into them and found they were manufactured by Smirnoff and held a sort of Russian vodka called Kummel. Some rare Kummel bottles are extremely old, but these are not—I estimate they're probably around 50 years old. They are obviously screw tops, so if you have even a passing knowledge of bottles you know screw tops are not particularly ancient.

They are white, but the white seems to be a coating and not true "milk glass", as they call it, and is even rubbing off in spots (see below). As you can see, the bottoms are clear. We thought they were pretty cool when we found them, so we kept them. We toyed with the idea of making lamps out of them or something, but truth be told neither one of us has the talent nor the ambition to really do that. Besides, according to Federal Law, we can't.

For another clue that these bottles aren't so anciently old: inscribed across the bear's shoulders is the legend, "FEDERAL LAW FORBIDS SALE OR RE-USE OF THIS BOTTLE". Now, despite my carefully constructed public display of devil-may-care insouciance, truth be told Mojo has already endured one minor tangle with Federal Authorities in her youth and now in the stick-in-the-mud maturity of middle age she has no great burning desire to repeat it. This despite now possessing a rather cool framed twenty-year-old summons to appear in Federal Court for a trial entitled THE UNITED STATES OF AMERICA VS....well, me. (You know you've made it big when the entire country is against you! And evidently I learned something from my punishment, since I did not spiral downward from my initial crime (camping in a National Park without a permit) to, say, robbing banks or killing people. Clearly, the system works!) 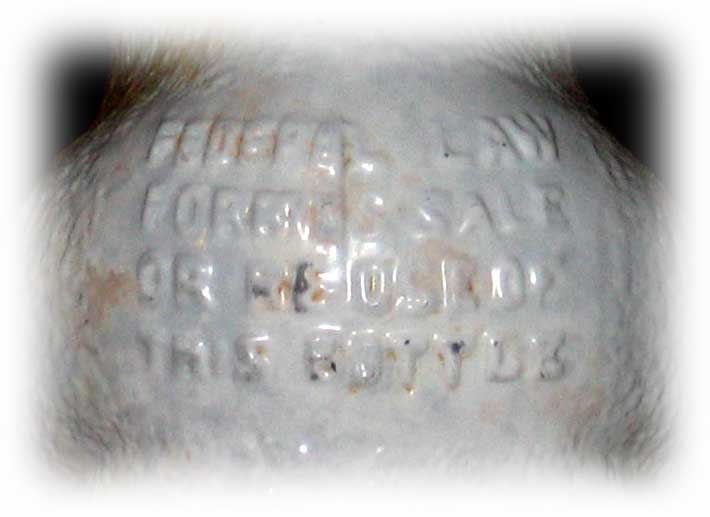 Now, even though I have SEEN these very bottles (well, okay, not these VERY bottles, but bottles exactly like these) being sold on Ebay in apparent direct violation of Federal Law, far be it for me to once again tempt the wrath of governmental bureaucracy. So the bottles themselves, I have decided, are not for sale. Instead, in the proud loophole tradition of ticket scalpers and other seedy characters who charge you a gazillion dollars for S&H, I have decided instead to sell the CONTENTS of these bottles, which is pure country air from the Berkshire foothills. Yes indeedy, if you have a need for a quick pick-me-up and there's no Kummel or vodka or other hard likker laying about, you can still have a little three-second vacation by uncorking one of these bottles and taking a whiff. (And I promise not to give you the one bottle where some poor wee mousie some twenty or thirty years ago crawled inside and didn't come out. That would be just too gross.) 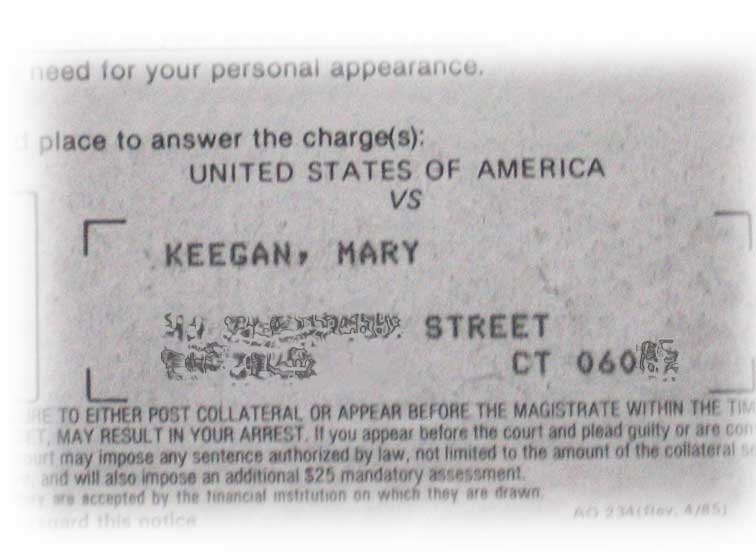 Of course, if you'd rather make lamps out of them or re-use them in some other apparent violation of Federal Law, you are on your own. Yeah, it's kinda cool to have a summons to appear in Federal Court and have the entire country rallying against you, but that was twenty years ago when I was younger and slightly stupider and the authorities, quite frankly, were much more lax about things. (Indeed, the only reason why I was charged was because the ranger couldn't contact her superior to get permission to let me go, for said superior was out to lunch at the time of my capture. (They were looking for me for several days, it turns out, so if I were caught the bosses would want to know about it. I was fully lectured about the hours of paperwork and police reports and calls to my parents and all sorts of taxpayer expenses you just don't think about when you're a stupid kid thinking "Let's go camping!")

I didn't want to hang around for a whole lunch hour so I finally said, "Ah, go ahead and fine me; we both know I'm guilty." She was a very nice person. I saw her again next year when I was legally camping and she saw my name on the register and stopped by the campsite and we had a very nice chat.) For all I know turning these bottles into lamps will put you on some sort of watch list, but what you choose to do with them is out of my hands, isn't it? 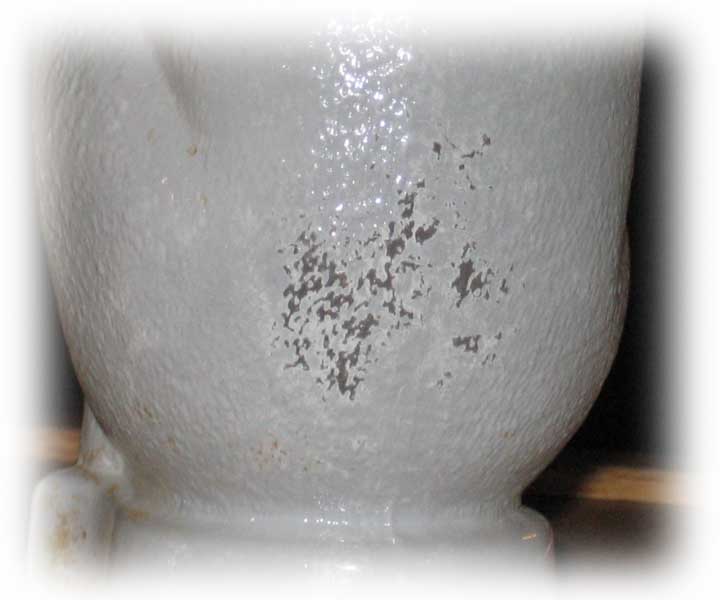 So take these beauties out of my hands (oooh, what a splendid transition; see, that's what professional copywriting will do for one's listings!) and enjoy the crisp mountain air these two beauties contain. The winning bid will get TWO quarts or so of healthy country air, incidentally wrapped in a matched pair of fifty-year old Kummel bear bottles. Bid early, bid often, and if you win, don't tell the Feds where you got 'em. Mojo rather likes her freedom. And stripes make her look fat. And if the prison people try to feed her oatmeal at breakfast, there's going to be trouble, since Mojo abhors oatmeal.

Where was I? I'm sorry. I think I was suffering some sort of flashback. You're not going to turn me in, are you? No, of course not. You’re a very nice person who is reading my auction and you are either interested in bear-shaped Kummel bottles or bear-shaped country air. Unfortunately if you are interested in bidding on Kummel bottles you will be disappointed because the bottles are not for sale, but are merely the incidental containers for what IS for sale, which is air. Country air. Fresh, wholesome country air. Perhaps air that's been breathed by a bear, since we have them around here. Bear Air.

(No, wait, that doesn't sound very nice; bears are rather stinky critters. But thanks to Professional Advertising and Copywriting, people don't really think about what bears are really like, instead they think of them like sweet fluffy teddy bears and not huge stinky creatures that will swat your head off if you are stupid enough to get too close. So maybe "Bear Air" would work. It's got the alliterative thing going for it. Or is it assonance? I'm pretty sure it's assonance. No, Mother, I am NOT trying to slip bad words past the eBay people; it really is one of those stylistic doohickies. If anyone says something like "ooh, I liked your tightly-controlled use of assonance in the Bear Air description" I just smile and nod and pretend like I did it on purpose and I know what they're talking about. Look, this is going on far too long. I'm just going to call it "Bear Air" and leave it at that. It's cute and punchy and people will remember it, even if it is far from accurate.)

Ahem. So, if you want to carry a little bit of country livin' where ever you go (Yup, we simple country folk like to drop our g's), may I suggest a nice quart bottle of Mojo's Bear Air. These two quarts come with their very own Certificate of Craptacularity, so you know it's quality air. Just look for the big cute-'n'-cuddly bear-shaped bottle! Sniff....ahhh! Yup, Mojo's Bear Air. A simpler time. A simpler place. A simpler air. Mojo's Bear Air. Only here, for a limited time, during Mojo's Craptacular on eBay. Better bid now, 'cuz when they're gone, they're gone.... 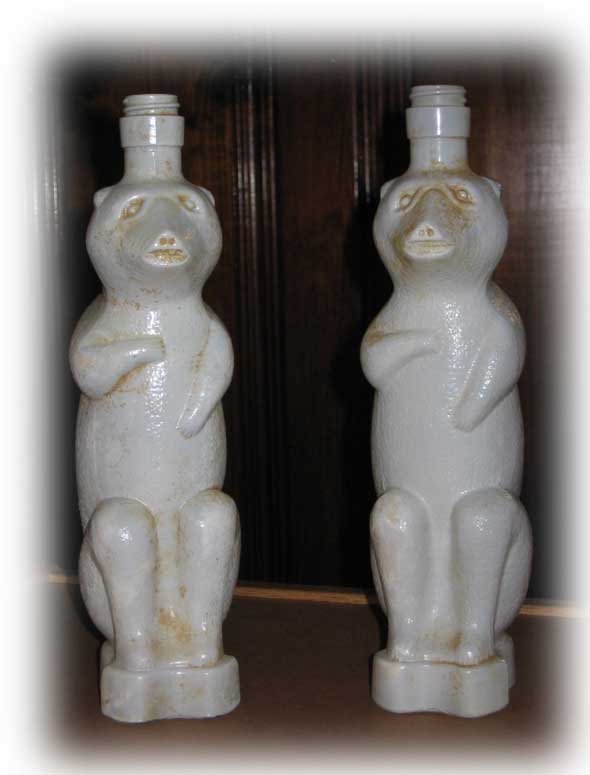