As If You Didn't Think Mojo Was Awesome ENOUGH....

So lately Mojo has been reading and enjoying rage comics. They tend to be somewhat polarizing; some people like them, and some just can't STAND them. I was inspired for a couple of reasons: first, while you can draw your own, there is a growing library of faces and props that make the whole process fairly quick and painless. These things are so POORLY drawn--kinda on purpose--that they are a main source of irritation for the people who do not like such comics.

On the other hand, getting real emotion out of stick figures is quite an accomplishment, and the faces that have survived the process have really evolved to the point where you don't really have to say anything, you just put the face in the panel and everyone knows what you mean.

Another factor of a good rage comic is, it has to be something that nearly everyone can relate to. For example, being female--and an old fuddy-duddy one at that--Mojo has a rather different interpretation--or emphasis--on the act of PEEING than most healthy young males do. I think it's 'cuz we girls just don't have the, ahh, intimacy there. So some rage comic topics don't necessarily appeal to me on that level. And while I can certainly relate to and empathize with Forever Alone comics, the sad (or, in her case, happy) fact is Mojo's been with someone for pretty much all of her adult life, so the whole doing-stupid-stuff-while-dating is more vague nostalgia than the immediate concern of other readers.

Also, as an old fuddy-duddy from a different era, as much as I've been around the internet since its early childhood (not quite from its infancy, but certainly by the toddler stage), I think due to age and upbringing I will never really get used to the language that is quite casually used by the younger folk. It's not that it's particularly shocking in and of itself--I use it myself when the situation dictates it--but I think it's a generational thing that I don't think I'll ever get used to it being thrown in so often in casual conversation. Still, it's a form of communication, and Mojo is not opposed to anyone communicating in whatever way they feel comfortable. Just that, ya know, she's probably not going to use it all that much in HER comics. Not that it matters; much like the anti-drug people sometimes imply you will be a SOCIAL PARIAH if you do not partake, yet in Mojo's experience all they do is shrug and say "That's cool." (I suspect some of that is "hey, more for me" but I've never really asked.)

All this boring preamble just to say that I started dabbling in occasionally creating my own rage comics. The first one hit the Cheezburger homepage and thus caused me no end of fame and fortune. So I put up another one yesterday, and GUESS WHAT? It got on the homepage as well!

If you are too lazy to click the link and vote on Mojo's artistry, I will provide it here: 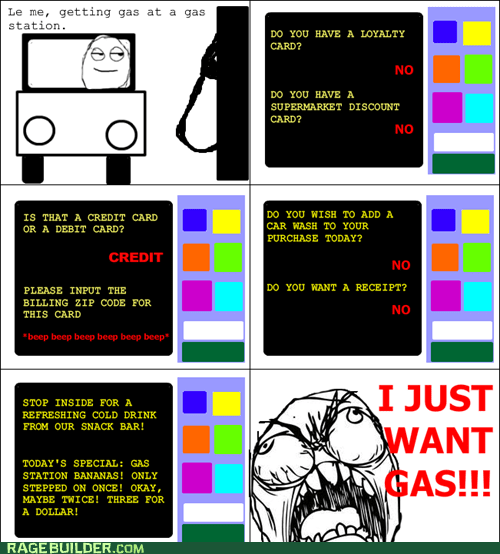 Rest assured Mojo's sainted Favorite Mother is about as proud as she could possibly be.