Mojo is a little ashamed to admit this, but she has no great ethnicity to speak of other than middle class suburban Connecticut WASP. True, her Favorite Father is Irish and this has saved her and her siblings from becoming impossibly genteel, but sometimes when Mojo observes the rich tapestry of traditions and histories of the people around her it bothers her that The Proud Traditions of Her People would rather look like a Martha Stewart dinner party. My mother's mother's family moved to Canada to escape the American Revolution (they were Tories), but that's hardly ethnic, either. (I will tell you that story on my mojocrap blog, if you're interested, but it is too long to tell here—yes, even for a Craptacular item description.) While Canadians are proud of their history and heritage, except for the extra politeness it's really not that radically different from an American upbringing, provided you don't ask my mother (the poor kid) to name some Revolutionary War heroes (because the Canadian ones, inspired by her mother's Tory teachings, were different from the answers her American teacher expected).

(Her family, incidentally, at one point owned a fair chunk of Burlington, Ontario, final retirement home of Joseph Brant, a famous Mohawk who--to use the specific language passed down even to me in my childhood—"spanked the Yankees and sent them home." This sort of diversity was not appreciated in the American public school system of the Forties, it turns out, and my mom got in trouble on a number of occasions parroting her mother's particularly Canadian viewpoints. And even when I was growing up, my friends would just look at me strange when I repeated this and then ask "Who's Joseph Brant?")

About the only cultural things suburban Connecticut WASPs have going for them is shopping malls, keeping a nice neat lawn (everyone talked incessantly about My Family, who continually Blighted The Neighborhood by letting the kids (gasp!) actually PLAY on the lawn!) and carefully observing the one cardinal rule of WASPdom, which is Don't Cause A Scene. Which is why, if you are a WASP working for a large corporation and you are caught embezzling thousands or millions of dollars (oh, rule number two: it's really quite gauche to discuss specific figures when it comes to money), it's not so much the fact that you are caught that causes gossip, but the fact that you have, though your errant behavior, Caused A Scene. The POLICE showed up at your house, and you were led away in HANDCUFFS! It's not whether or not you are guilty, it's how UTTERLY MORTIFIED your Significant Other must be right now, the poor dear, because you had the unmitigated TEMERITY to CAUSE a SCENE.

Which is why all the rich dudes on the Titanic looked so brave ordering up a final round of drinks while the ship was going down. It's not so much they were brave, they had just been taught from infancy to not cause a scene, no matter what. Your freakin' PANTS can be on fire and you'd better not react in an embarassing fashion, or people will talk about you for WEEKS about the time your pants caught fire and you Caused a Scene.

All of this is to say that while Mojo feels herself to be quite cool and open-minded to new ideas and reasonably unflappable no matter what might come her way ("Hey, I listen to Frank Zappa" I sometimes say, in my pathetic attempts to show how cool I am, but I generally have stopped since many of the younger set respond with "who?" just like they did a generation ago with Joseph Brant) every once in a while it dawns on her that her genteel WASP upbringing really has little bearing in today's world and she is sadly clueless when it comes to many things that young people now accept as a part of their lives. Much of this Mojo does not understand, such as the astonishing tendency nowadays for people who should not be given the slightest tiniest bit of attention to get put on television again and again and become minor celebrities through the sheer virtue of their ability to be an idiot in public. Yes, we all know Mojo can be an idiot when she puts her mind to it. but she does not obsessively seek it out like THESE people. She still maintains that Aura of Dignity. And no, you will have her word here and now, she will never go on a Reality Television show, which is a half hour or an hour of insipid morons Causing a Scene for the cameras. It just Isn't Her. 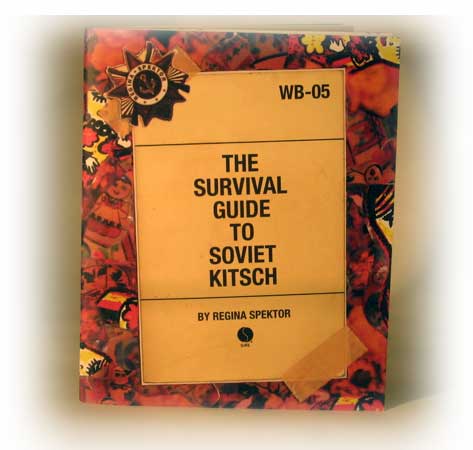 And neither are these two things. Not that these are necessarily stupid (unlike Reality Television, which is indeed stupid, yes, every single one, even the one you just thought of now that you like a whole bunch), but Mojo can tell just by looking at them that they are Not For Her. Mojo has wide and varied musical tastes, but sadly most of the people she listens to now are dead, and there is so much she has yet to listen to from the people she likes who are dead she doesn't have the time or the inclination to try new people, like these. Indeed, the number of new people who arrive daily expecting to be heard and appreciated is so vast it makes Mojo tired just to think of it, and she goes back to her Ella Fitzgerald collection and sez, "Ella, I haven't even BEGUN getting through all of your sixty-some albums, how can they expect me to listen to new stuff, too?" whereupon Ella doesn't say anything in reply because sadly she is dead.

Anyway, the one thing is a combination book and CD from someone named Regina Spektor, who is to be commended for her creative attempt at multimedia marketing, even though Mojo herself is not a HUGE fan of collagey-arty-text pasted all over the page. I have no idea how she is as a music person—I assume the CD is music—because I have not opened the sleeve to listen to it. It's all very busy and exciting and Mojo just gets tired when faced with busy and exciting things nowadays. And for those of you now saying Mojo is Intolerant of Exciting New Ideas, I say: what, are you just joining this party? Intolerance is Mojo's middle name! If I were TOLERANT, I would embrace everything people give me with joy in my heart, and fill my house with all this extraneous stuff. But instead I am ACTIVELY TRYING to get RID of things, which if not intolerance at the very least implies something very low on my list of priorities. Anyway, this is not meant to be a judgement of Ms. Spektor's talent or lack thereof, for I have not heard it, and only very briefly flipped through the little book, which is entitled "The Survival Guide to Soviet Kitsch", so I reserve judgement for whoever wants to step up and read and listen. I do not have the time. 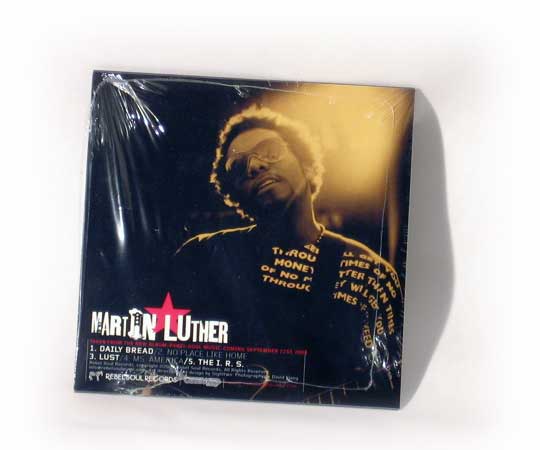 The second is some sort of demo CD from someone named Martin Luther, who is apparently a musician when he is not Causing a Scene by nailing up snarky criticisms onto the door of certain churches. Wait, wrong Martin Luther. This one is considerably younger. All I know of this person is from what I read on the cover of the CD. Apparently he is the uncut funk. Mojo is not exactly sure what the uncut funk is, but she assumes that is a good thing, since otherwise they would not put it on the CD cover. This young man apparently also wears "his heart on his sleave", which causes the Professional Editor in Mojo to quail and makes her want to correct it. But she will not since she has a habit of correcting wrong things and thus drawing ire, or at least exasperated sighs, so now she keeps her corrections to herself.

(Just this weekend we were seeing the movie Over the Hedge and the raccoon called the turtle "amphibian" which irritated the stuffing out of Mojo. She did not say it, but anyone with the slightest brain knows a turtle is a reptile, but she kept it to herself and did not whisper the correction to her Favorite Husband like she so desperately wanted to. And it's a good thing, too, because the very next line the turtle corrected the raccoon himself and it turned into a running gag and Mojo would have looked foolish if she had given in to her impulse. So maybe "sleave" is not a typo but some cool new slang and Mojo will look like an idiot if she tries to correct it, so she will just pretend it's not there for fear of causing a scene.) Anyway, he sounds like a perfectly wonderful person, judging from this CD cover, and there are five cuts apparently taken from his new album, entitled Rebel Soul Music. I have not opened it, because, like I sez, I don't have the time.

So there ya have it. Mojo's Wonder Bread upbringing in a nutshell, but to temper the boredom I offer you these two exciting new artists to listen to and enjoy. You will also get a Certificate of Craptacularity, which isn't as exciting and the text is all right side up and horizontal, and it's certainly NOT the uncut funk (at least I don't think so, but what do I know?), but it is a pleasing green color. At least Mojo finds it pleasing. YMMV. If you find these CDs please, feel free to bid, and if you win, they're yours!