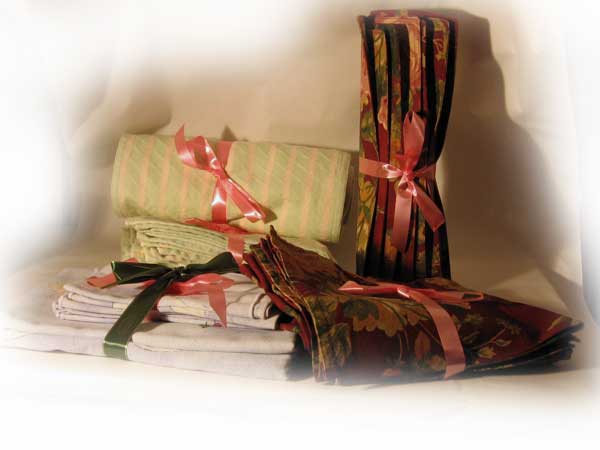 Hold onto your hats, fellow eBayers! At the bottom of this lengthy and pointless description you will have the privilege of bidding on Mojo's first (and hopefully final) Placemat-palooza, complete with matching cloth napkins! Who doesn't like placemats, huh? By asking that, I'm assuming if you clicked on this auction you do indeed like placemats, because otherwise why would you click here? Granted, Mojo is a scintillating wit, chock full of bon hommie and hail-fellow-well-met, whatever that means, but she certainly hopes your slavish devotion to every word she types does not make you click on items you have absolutely no interest in. So I'm assuming you are just MAD about placemats. Good for you! You're in the right place!

Because Mojo, frankly, is not quite so keen on them as you are. Not that Mojo thinks any less of you for liking them. And as we say around here, Mojo's disdain is your lucky gain should you win this auction. (And just for you, at the end of this auction, Mojo will muster up all the fake enthusiam she can for placemats. So you won't want to miss that. The Oscar buzz is growing.)

A Certain Person who gave me some NICE stuff for the Craptacular also gave me these. I suppose if you like placemats they are nice. They are all cotton, according to the one tag I saw. The rest rather FEELS like cotton, but what do I know? Words, not textiles, is Mojo's thing. Are. I mean, are Mojo's things. Thing. Sigh. Mojo likes words. Personally, I suspect the donator was just saving a trip to the dump, but am I going to say that to her face? No. If anything, Mojo is gracious and kind, especially when that person now knows the route to Mojo's house. So I smiled politely and accepted them, and spun around to throw them up on eBay so fast it was like a mini-tornado in the house. Because Mojo just isn't a matching placemat and napkin kind of girl. Mojo instead has perfected the delicate art of eating over the sink. Not because she is a LOSER, of course, but because she is so busy writing these item descriptions and fielding people's entries into the Craptacular she does not always have the time to eat properly or do extraneous dishes or do the wash, so she has to be careful where she drops crumbs. (Remember that, as you flip idly through these, that Mojo is wasting away to nothing for your selfish entertainment. Sad, but true... well, sort of true. Well, not really. But it is expected for one to suffer for one's art, so this is my suffering. That, and having to be nice to people.) 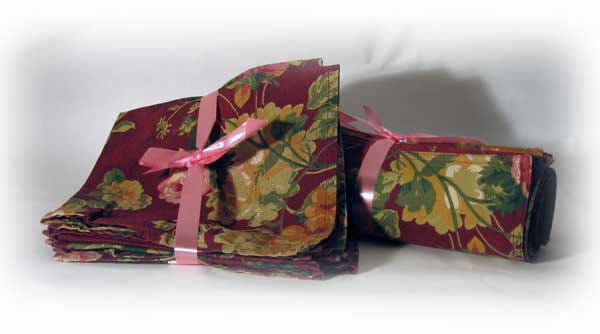 It is a box full of what appears to be placemat and napkin sets. I have no idea if they are new or used. They look new, and they don't seem to have gobs of crusty dried food hanging off of them, so my guess is they have not been used but have been languishing, unloved and disrespected, in the bottom drawer of the dining room buffet. I am not taking the ribbons off to count or inspect them. (Why? you ask. I mean, we all know that Mojo is inherently LAZY and will do practically ANYTHING to get out of work, but a few RIBBONS? C'mon! To which I say: no, It's not the ribbons, it's the TYING the ribbons that gets to her. Because while Mojo is a gal of many talents tying ribbons nicely isn't one of them. She's like, really, really bad at it.When Mojo give gifts--which is a prerequisite for being in my family, by the way--her "wrapping" consists of the bag it came in and (if the recipient is lucky) she will attempt to remove the price tag. Sometimes she does not remember to remove the price tag and just as the recipient is admiring Mojo's 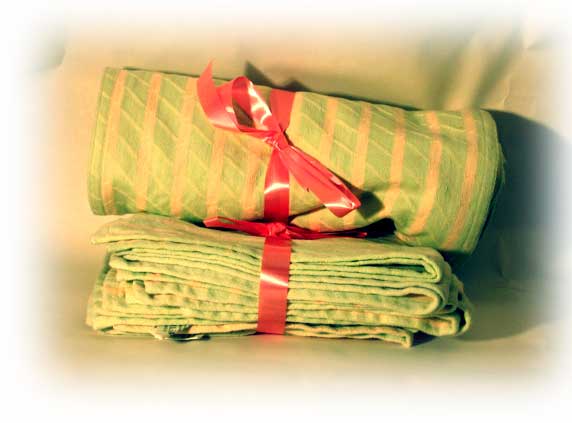 thoughtful and tasteful generosity she's suddenly like "AHHH! GIVE IT BACK!" just so she can get the price tag off.) So think of this as a placemat 'n' napkin grab bag, and have fun! Mix and match and pretend it's the cloth version of Fiestaware! You'll start a TREND!

Each pack seems to have five or six placemats and five or six napkins. There are three sets. One is a maroony-leafy pattern and probably the one I like best. (Mojo likes dark depressing colors.) It has placemats and napkins, all tied up in kicky pink ribbons. The second set is off-white and a sort of melony-green pastel stripes, like what a prisoner might have to wear in a really mean prison where they corner you in a storage closet and make fun of your clothes. Again with the ubiquitous pink ribbon! (I am starting to think maybe she is dumping all her old ribbon off on me, too. As it is I secretly resent her rubbing her superior ribbon-tying abilities in my face. I guess it's not so much a secret anymore, huh? Who does she think she is, anyhow? Ribbon-tying isn't everything. Well, unless you wrap presents professionally for a living. Then I imagine it would be fairly important. Or I suppose if you wanted to show the person you are giving things to that you really care about them and you want to make their gifts look nice. But in Mojo's world, ribbon is not very high on the list of priorities. I suspect it's right down there with placemats.)

The third set is a conundrum. That's a fancy way Mojo has of saying "I dunno." It has what appears to be a pile of napkins, tied up in that kicky pink ribbon, but the other thing, in the green Talbots ribbon, appears to be one big tablecloth instead of a bunch of placemats. Or maybe it's one BIG placemat for a GIANT. Or it's a tablecloth, and instead of napkins they are placemats. I don't know. I think they're napkins. And the set does NOT come from Talbots. At least I don't think so. When I was going through the box I saw the Talbots ribbon and, in a feeble attempt to break the awkward silence (because what do you say when you are presented a giant box full of placemats? I don't know. The winner of the auction will have to tell me what they said, so I will know in the future what to say. I imagine it would be something like "Oh, BOY! Placemats!" but while that sounds like a nice thing to say it really only takes five seconds to say it and then you're stuck with the silence again).

Anyway, when I saw the ribbon, I said (in a somewhat exaggerated over-cheery voice, but I don't think she noticed) "Oh, Talbots! So these are from Talbots?"

Whereupon the donor stared at me for about twenty seconds, and then said, "No."

Which is now why I claim they are not from Talbots. For all I know (oh irony of ironies!) they might come from Talbots, but I don't think so. When I prodded her with a stick the Placemat Lady finally allowed that she ran out of pink ribbon and had to use the Talbots ribbon, which merely confirmed my theory that she was dumping old ribbon on me. But I covered beautifully by saying something like "Well, they COULD be from Talbots, for all I know, for these look SO nice!" to which the Placemat Lady grunted "Well, you can have 'em, then. I sure don't want the stupid things."

Indeed. "I sure don't want the stupid things." Which is why I offer them to you, proud placemat fan! If you are the sort of high-class refined person who actually sits at a table like civilized people to eat, and place napkins in your lap, these puppies are for you! Except they're not puppies. They're placemats, And napkins. Mojo LIKES puppies and wouldn't put them up for auction on eBay even if she could. She would make you answer a billion questions about puppy care and dog training to see if you would be a suitable owner for her puppy before she would even let you pet the animal. But these are NOT puppies. They are PLACEMATS and NAPKINS and maybe a TABLECLOTH and since they are not sentient Mojo does not particularly CARE should you mistreat them. Good luck, happy bidding, and enjoy your placemats! Whoohoo! Placemats! All right! Yeah! Woot!