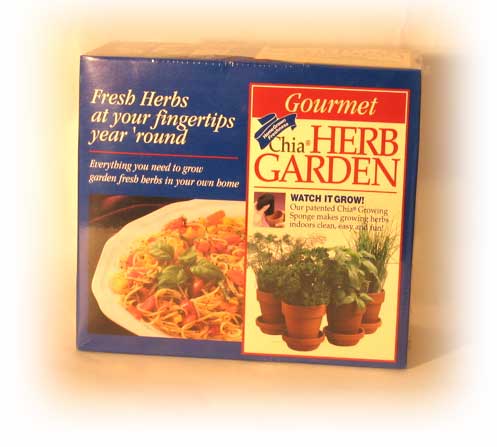 As everyone is (hopefully!) aware, Mojo did not INVENT crap. She merely exploits it for her own evil purposes. Mojo feels this somehow makes her morally superior to those who actually CREATE this stuff, thinking someone will actually buy it. Mojo does not expect anyone to buy her crap. If they do, it is a shock to the system and she must lie down for several hours with a mask on her face. And then she is stuck with the hassle of packing it and shipping it. And while the lady at the post office is a very nice person, Mojo suspects when she sees Mojo coming she privately curses to herself and grumbles. She hides it well. (In addition to her other fine talents and character traits, Mojo tends to be paranoid. The post office lady is a VERY NICE PERSON who does not need Mojo slandering her on eBay.)

Anyway, in Mojo's brain, nothing quite sez "Here, I found this in the dustbin at the dollar store, Happy Birthday" like anything with "Chia" in the title. I mean, these people single-handedly INVENTED gifts for people who Just Don't Care. (Okay, them and the "Totes" people who make the little umbrellas and rubber shoe covers like we used to have when we were kids but now I shall not say what we called them then because it doesn't sound Family-Friendly anymore. And no matter what a horrible person Mojo is she does try to remain Family-Friendly in public, or her mom will hear about it and yell at her.) 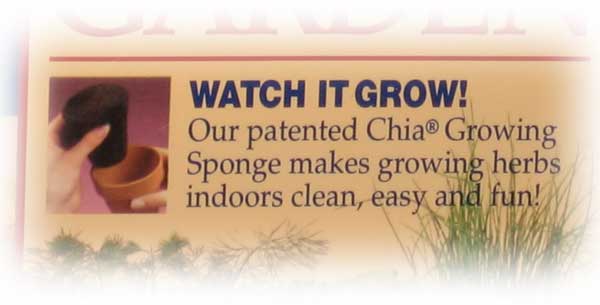 This is the Gourmet Chia Herb Garden. It is unopened, much as I was tempted to rip it open and bring stuff out and watch it grow the instant I got it. Because this is what the label claims. Now, Mojo is no stranger to living green things. She enjoys gardening and whatnot. But as much as Mojo likes doing such things she realizes that sitting down and watching a plant grow is probably one of the most BORING THINGS human beings can possibly imagine. Why? Because we do not live in the same timeframe as plants. Human interactions are often measured in seconds--"Hi, how are you--oops, gotts run" whereas plants can take several weeks getting to "Hi". So watching your Gourmet Chia Herb Garden grow--I wouldn't advise it, personally. Unless your life truly is as dull and pitiful as Mojo secretly suspects. 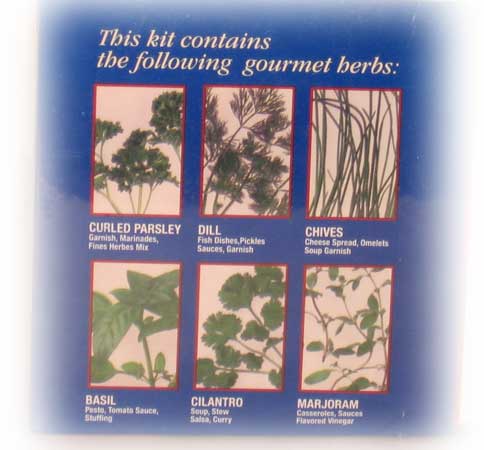 My regular readers are well aware of Mojo's ability to make the ordinary extaordinary just by tacking on a single exciting word or two (like the word "extra" on the word "ordinary"). Mojo tries to rein in this ability because she mostly wants to entertain, and not trick some gullible eBayer into buying something they don't want. It is a gift Mojo tries to use only for good, unless she really, really wants to get something out of her house. Notice that the Chia people have attempted the same thing, here. They think by tacking the word "gourmet" onto their product it immediately places them in a whole different eschalon of country estates and Mercedes and tea parties on the ceiling. (Whoops. That last bit comes from Mary Poppins and actually is the sort of thing THAT CROWD does not endorse.) Mojo also is not quite sure why one cannot just buy a couple of cheap pots from the local garden center and a couple of packets of seeds and replicate the same thing for next to nothing. Oh, I see, because they have a "patented Chia Growing Sponge". I don't know if I would like to have a Growing Sponge in my house. Seems to me it would soon grow right out of the miniscule pot, roll its way down the hall (sorta like "The Blob") and smother me to death in my bed.

What's that, you say? The sponge doesn't grow? It's the PLANTS that grow? I knew that. I was only testing you. No, really, I knew all along. Anyway, in addition to being "gourmet", this gourmet box shows you six gourmet pictures of the gourmet herbs you can grow—but somewhere there is gourmet tiny type that explains you only have the facilities in the kit to grow four of them. So you must play favorites. Imagine how rejected Cilantro and Marjoram must feel, since you know DARN well nobody's ever HEARD of them and people are going to go with the names they are most familiar with. Imagine people's surprise when they grow dill and get this feathery stuff instead of the expected pickles. That is the sort of tragic misunderstanding that results when people are so removed from the natural world they feel the need to have a dirtless "kit" instead of dealing with mud and manure and whatnot.

Anyway, should you want to use this for yourself or give it to that certain special deserving gourmet in your life, the gourmet Chia Herb Garden comes still in its gourmet shrink wrap, and accompanied by an extra-special GOURMET version of the Certificate of Craptacularity. (That doesn't mean you can actually eat it. It's just a WORD I have cleverly inserted to inspire people to bid.) So bid away, and if I am wrong and you really, really like to sit and watch plants grow that is your perogative. Just bear in mind it will take a while. Don't go emailing me back shrieking because it's been a week and nothing's popped up. Because while Mojo likes to pretend she is all-inclusive and has the patience of a saint, the truth is she will find such an interaction very tiresome, even if now you intend to do it as a Clever Joke. Here, I will react accordingly: ha. ha, ha, gosh you're funny. Click (that's me hitting the delete key.)