(Oh, hey, he's finally up on eBay--go give the poor fellow a visit, and/or bid on him if you have nothing better to do and you're into that. Otherwise, just enjoy or hate as you see fit....) 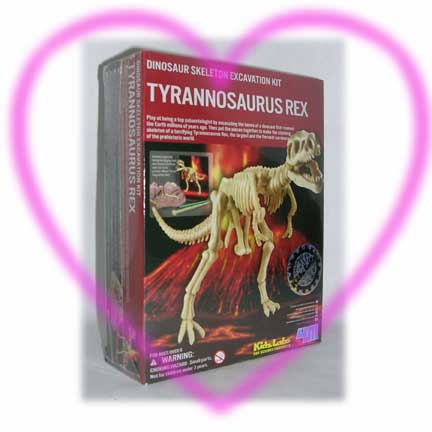 Try to contain your excitement! Yes, Mojo's back with a whole year's worth of crap, and in typical Mojo fashion she is a month late in starting the festivities, which she will have you believe is because she is oh so busy and important but we both know it's because it takes an Act of Congress to get her off her sorry behind and do the things she promised she would eventually get to. (Yes!!! Mojo ends yet another sentence with a preposition! She is ON A ROLL, baby!)

So being it's now February, and hence Valentine's season, what BETTER way to tell your Loved Ones that you indeed tolerate their very existence with Mojo's T-Rex of LUV. Oh, sure, there will be some cynics out there who will try to tell you that Mojo has just come up with that name as a gimmicky "hook" to make you want this for Valentine's Day, and in reality a T-Rex is a heartless, soulless reptilian predator with a brain the size of a kitten's—and not a particularly BRIGHT kitten, either, but rather the sort who keeps showing up on YouTube smacking into windows and mirrors. Mojo indeed used to OWN such a kitten, but it did not survive much into adulthood, I suspect because it was awfully fond of dogs and while yes, our dog was a kind and loving creature I'm thinking the neighborhood coyotes looked upon idiot kittens in a slightly different fashion. So poor Ellie (that was the kitty's name) went to live on a farm somewhere. At least that's what my Favorite Husband told me. Which is sort of odd because we already sort of live on a farm. At least it WOULD be if I bothered to grow anything. But I digress.

Oh, dear, here I am not three paragraphs into this item description and I've already brought up dead kittens. Ya know, as much as Mojo likes to pretend she knows what she's doing, there are times when I suspect she's really just blathering this stuff down on eBay without really thinking about it, or considering how it will sound to her adoring public, nor how dead kittens might not be the best word picture a Professional Copywriter such as Mojo might want to paint when trying to convince you to buy her crap. Where was I? Trying to make a spurious connection between nature's most fearsome predator, the Tyrannosaurus Rex, and Valentine's Day, which was yesterday so once again Mojo is hopelessly late to the party.

Stay with me, people. Because I am about to connect the dots. Granted, when we're done it will probably look like a five-year-old connected them, but they will be connected nonetheless.

Let me restart, so just forget about the dead kittens and the Jurassic Park images now dancing through your head of a particularly scary T-Rex using human beings as fun chew toys—oh, MAN, I just shouldn't have brought THAT up either, huh?—and instead I will get into the Valentines' Day Spirit by saying that I, Mojo, am pretty sure I am fifty percent of one of the happiest marriages out there. I say that not to rub my spectacularly successful life in your lesser, humdrum face, at least not consciously—subconsciously I'd have to say all bets are off, for WHO KNOWS what's lurking down there, although I am sure if you were to analyze all the Craptacular items and item descriptions through the years you might find yourself with a very disturbing answer—but merely to point out that this T-Rex, as banal a gift as this might appear to the untrained eye—that would be YOU, ya big lug—is in fact the product of over twenty years of love and caring and devotion and all that crap.

Because as happy and content as Mojo is with her Favorite Husband, we Just Don't Do The Gift Thing. Well, usually. That is to say, Mojo does not do the gift thing, and Mojo's Favorite Husband, I suspect, would seriously LIKE to not have to do the gift thing, but he is married to Mojo, which as you know means even if Mojo CLAIMS it's okay, you don't have to buy me anything, after all, it's JUST my birthday, really, just another day of the week, what she really means is, "I will pretend not to care but I will be UTTERLY CRUSHED if you don't get me at least SOMETHING." Because as much as Mojo complains bitterly on the Craptacular, the simple fact remains that she likes receiving gifts and hopes they will keep coming down the pike on a regular basis. Large, expensive, LAVISH gifts. But again, I digress.

So pity the poor fool who has married Mojo, and now receives these terrible Mixed Messages. What's a boy to do? I'll tell you what he does. He goes to some drugstore or Discount Salvage Store or finds something in the trash that can be gussied up with a few ribbons and presented as an actual gift. Which is what happened here. (He also got me some chocolate, so it's not like he's a TOTAL monster.)

What IS this, you are now asking. It's an Exciting Dinosaur Skeleton Excavation Kit. (Okay, so I added the "Exciting" part. Gimmee a break.) I vaguely recall seeing similar "excavation" kits when I was a wee lass and I was just a HAIR too old for them but I remember thinking "Gee, that sort of looks like fun." Because the manufacturers take an ordinary cheap plastic toy and BURY it in some sort of sandy plaster and you have to chip the toy out of the plaster much as an archaeologist and/or paleontologist might excavate an artifact. (I mention archaeology because a. the original product I remember seeing as a kid had something to do with faux ancient pottery; and b. an interesting factoid about Mojo is she actually has a real bona fide INTEREST in archaeology and used to subscribe to the magazine, although that has somewhat waned as she herself began entering the fossilization process of her life; and c. yes, I know fossilization belongs to paleontology NOT archaeology, I was just making a lame joke just as Gary Larson used to make lame jokes about polar bears and penguins living together when they are LITERALLY poles apart. Jeez, I just can't get ANYTHING by you, can I, Smarty Pants?)

Where was I, again? Oh, when I first saw one of these excavation kits I thought it sort of looked like fun. And then Life dealing with Mojo the way Life usually deals with Mojo—that is to say, loading her up with so much Cruel Irony she has felt the need to seek out a support group—a few years back I was babysitting a five-year-old friend and it turns out HE had an excavation kit, remarkably similar to THIS excavation kit, with a T-Rex skeleton and all, and we decided one afternoon to tackle it. Well. It's much, much, MUCH more difficult than it looks. The plaster is actually very, very hard, so instead of just brushing away a bunch of sand like they show you on TV you are hunched over this BRICK for HOURS hacking away at it a freakin' GRAIN of sand AT A TIME, while your five-year-old friend is off in the other room watching cartoons. And when you finally emerge from the kitchen with puckered fingers from wetting the plaster holding the bowl full of plastic skeleton pieces and you say "Hey, look! It's out! Let's put it together!" the kid just sort of looks at you blankly and says, yeah, whatever, can I have a PBJ sandwich.

At some point between THAT moment and the resultant crying jag you *DO* have this brief, fleeting feeling of Accomplishment. Treasure it, my friends. Treasure it. Because that's all you're gonna get. Trust me on that.

UNLESS, of course, you were to actually BID on Mojo's Exciting T-REX OF LUV, whereupon if you are indeed the winner in the resulting melee of bidding and fisticuffs you will emerge bloodied and perhaps permanently scarred but also the proud owner of said Article of Undying Affection. Give it to a five-year-old if you don't like their parents all that much, or keep it and cherish it and perhaps give it to YOUR spouse to signify a special, special day. Either way I should like you to sign this tiny small waiver absolving Mojo of any responsibility for your future actions with this thing. Sign right there at the bottom. No, just skip over that part about "power of attorney"; that's just some sort of legal gibberish they make me put in there. I don't know what it means, I'm sure it's nothing, just sign down there. Thanks.

What exactly is Mojo's Craptacular?

Clearly, we have issues here. But instead of repeating myself ad nauseum, I'll just direct you to my oh-so-exciting About Me page, where you can read about the Craptacular and get pointed to the entire Craptacular past, present and future. As it says (okay, so there's a little bit of repeating, but really, it's comparatively mild), lots of time-wasting fun, with little or no socially redeeming qualities whatsoever.

All the auction items sold this year will be going into Mojo's Can o' Loot, where it will sit moldering until some worthy person wins the right to donate it to the charity of their choice sometime in December. And no, you don't have to buy anything to play. Just show up on the Mojocrap website, follow directions and try not to annoy Mojo any more than you have to. 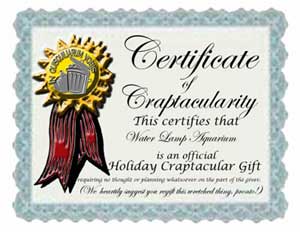 Each Craptacular item (should you actually WIN one of these things, oh lucky, lucky you) comes complete with an official, signed Certificate of Craptacularity, perfect for framing or starting fires. It will also come with a copy of this professionally-crafted product description (for posterity's sake). So happy bidding, happy regifting, have fun, and enjoy Mojo's Exciting Year of Crap! Marginally bigger and marginally better than ever.

There's a question ya gotta answer if you want to make the Can o' Loot go to YOUR favorite charity! Sign up today!