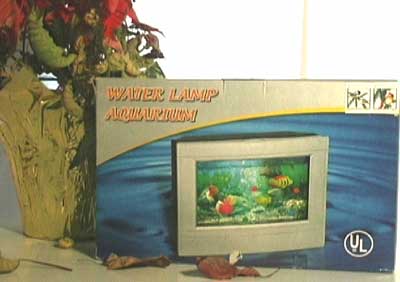 Who would have ever thought you could use all three words in the same name? Certainly not me. Perhaps that's why my career as a copywriter has suddenly gone down the loo. I still think it sounds vaguely like the word-for-word translation of a Japanese instruction manual, but no: this quality piece of merchandise is proudly made in China. But it's okay for us American types 'cuz it's got the UL label prominently displayed on the packaging, so you can rest assured it won't electrocute you. Unless you do something stupid, of course. And that's just Darwin in action, as far as I'm concerned.

I looked on the internet and I can't find another one out there, at least going by the search term "Water Lamp Aquarium". Could it be this is the only one of its kind in the WORLD? People of good taste can only hope, though I privately doubt it. So you get this plastic thing that's made to look like a little TV. (Comment apropos!) You fill it with water (sorry—you have to supply that part) and add a bunch of plastic fish (also included) and voila! An instant faux aquarium. Wow! How craptacular is that?

Wait—it wouldn't be a true Holiday Craptacular unless there's more. And there is! For starters, it looks like the box has seen better days—there's some dinged corners and a rip mark, possibly from me getting too enthusiastic about getting the wrapping off such a craptacular gift.

But—this is the best part!—somewhere in this gift's checkered history someone thought it would be more festive to put some American Lung Association sticker-seals on the box. There's not one but TWO of them, one depicting chickadees and the other a rather poorly-proportioned cardinal (if you know your proper bird shapes). As if that was not reason enough to love this gift, the seals indicate they were put on in 2003, ONE FULL YEAR before I received it! So either the giver found the stickers in a drawer and stuck them on just to be festive, or I've been regifted! Woo-hoo!

I mean, this gift would have been craptacular enough standing on its own merits (or lack thereof), but the possibility of a regift sends its craptacularity factor right up into the stratosphere! I am not mean enough to keep such a bounty of poor taste to myself, so I share it with YOU, humble Ebay person, in the hopes that you too will appreciate just how special this thing can be. Bid early, bid often, 'cuz I only have one, and when it's gone....well, hopefully it's gone for good.