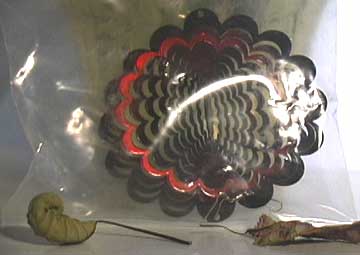 Extra credit goes to anyone who can tell we what in heck 'n' tarnation this thing is. At first I thought it was some sort of huge tree ornament. My husband thought it was a suncatcher. Maybe it's both. It's sealed for your protection in a heavy plastic bag I have not opened. It's about 5.5 inches in diameter, sorta flower-shaped, and it's made from a surprisingly heavy gauge sheet metal. The fasteners used to hang it seem to be the sort of thing people would use for deep sea fishing lures, but since there's no treble hooks or feathers attached to it I'm guessing it's NOT a fishing lure. That would be one heckuva tuna, eating this thing.

It is sort of a red shiny burgundy color. I think if you threw it at someone you could seriously hurt them, so I suggest you do NOT throw it at someone. Nor should you give it to children, since no doubt one of the first things they'll do is cut themselves on a sharp edge and/or throw it at someone, and it's all fun and games until somebody loses an eye. I can easily envision the world blaming ME for purposely injuring your darling little brats, even though I'm like a gizillion miles away and despite all outward bluster I really wouldn't hurt a fly, so just don't do it, okay? I have enough problems in my life without that.

I honestly believe this is one of the most pointless things I have ever been given. I hope you think so, too. Gifts don't get much more craptacular than this, folks. At least most of my other stuff you could conceivably use, but this is truly and mind-numbingly useless. Imagine the look on someone's face when they open your present and see....this. Whatever the heck it is. Guaranteed more useless than fruitcake, and so much more original.

"Gosh, where did you get it?" your victim will innocently ask. Here I will ask that you do NOT say "Mojo's Holiday Craptacular" for fear of personal reprisals against me and my family. Say you picked it out special just for them, and leave it at that.